Atheist "megachurches" on the rise.

Nearly three dozen gatherings dubbed "atheist mega-churches" by supporters and detractors have sprung up around the U.S. and Australia - with more to come - after finding success in Great Britain earlier this year. [...] The founders, British duo Sanderson Jones and Pippa Evans, are currently on a tongue-in-cheek "40 Dates, 40 Nights" tour around the U.S. and Australia to drum up donations and help launch new Sunday Assemblies [BM: Jesus Christ]. They hope to raise more than $800,000 that will help atheists launch their pop-up congregations around the world. So far, they have raised about $50,000. [...] "There was so much about it that I loved, but it's a shame because at the heart of it, it's something I don't believe in," Jones said. "If you think about church, there's very little that's bad. It's singing awesome songs, hearing interesting talks, thinking about improving yourself and helping other people - and doing that in a community with wonderful relationships. What part of that is not to like?" [...] "In the U.S., there's a little bit of a feeling that if you're not religious, you're not patriotic. I think a lot of secular people say, `Hey, wait a minute. We are charitable, we are good people, we're good parents and we are just as good citizens as you and we're going to start a church to prove it,"

And that, ladies and gentlemen, is the worst reason to start a church, ever.

During the service, attendees stomped their feet, clapped their hands and cheered as Jones and Evans led the group through rousing renditions of "Lean on Me," "Here Comes the Sun" and other hits that took the place of gospel songs

I wanna throw up now. 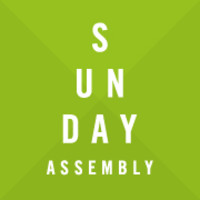 Godless Congregations for All: The Sunday Assembly Global Platform

Why Sunday? 'coz it’s there? I don’t trust this movement…best bits of religions…who gets to choose? seems very opportunistic. so each village/town gets a 'church" ?? and what do you preach (who preaches?) Do good to others? etc etc. So the Golden Rule applies. What other rules will apply? Raise money…to what end and whose benefit? Too many questions.
On the other hand man is a social being and needs to belong to groups. One could argue that atheists could feel excluded by definition, hence the need to establish atheist interest groups (like this forum).

I don’t trust this movement…

IMHO all “mega” churches exist with the sole aim of making money.

best bits of religions...who gets to choose?

Your friendly coke-addicted past… uh, I mean… indoctri… hehe, what I mean to say is “church leader”.

On the other hand man is a social being and needs to belong to groups.

I didn’t think until last night, when I posted this, that atheists were the handy-clappy singy-songy getting riled up by the “man” kinda people. But it seems I am woefully mistaken. I’m seriously depressed by this thought. Is it really so that even a large contingent of what I had thus far thought to be reasonable people, are getting all swept up by the same trappings they escaped in the first place? Albeit in a slightly different guise?

I share your reservations about what will get “taught”. I mean a church is basically an indoctrination machine, the only real question is what are people going to be indoctrinated with. Even giving these folks the benefit of the doubt and postulating that they have good intentions, I cannot see this NOT resulting in a new type of group-think.

I mean we have the forum, we have SITP, and more importantly we have sunday-morning sleep in’s. Those are all great for the soul. We really, really don’t need the same watered down music, the same platitudes, the same peer pressures… no. It gives me the heebie-jeebies. And it’s not often that the BoogieMonster himself gets the heebie-jeebies.

More rationally speaking though, this is going to be a devastating blow to us that refuse to acknowledge our opponents’ claims that atheism is a religion. This is going to muddy the waters to such a degree that in future instead of just being able to say you’re an atheist, you’re going to have to point out that you’re also not a “religious” atheist.

I swear the day someone knocks on my door on a sunday morning to ask if I’ve found atheism, somebody is going to get a cap in their ass.

My, but Boogie’s mightily upset about all this… >:D

I agree though, the whole idea is rather nauseating.

So, Boogie, have you found Atheism yet? I have some inspiring tracts I can PM you?

Well I can see there might be a need.

But not for me those where all the parts I hated about church.

Next you know there will be evangelizing atheist … o wait

So, Boogie, have you found Atheism yet? I have some inspiring tracts I can PM you?

Sorry I have way too much Mormon and Scientology literature I’ve been obliged to read by friendly people wielding passive-aggressive smiles. And I mean they have such happy news to tell me.

… ;D of course what’s missing is an atheist tome…someone prepared to write it? Oh wait the Bable was written by zillions of people mostly unkown. And then there’s the need for a father figure…oh holy one! FSM?? and his noodly appendages qualify?

Send your cheques to Justnownowism today, we’ll get right on it.

;D of course what’s missing is an atheist tome…someone prepared to write it?

And then there’s the need for a father figure…

FSM?? and his noodly appendages qualify?

As a father figure? Not unless “noodly appendages” is very loosely defined… >:D

I come back to the question of funerals. This, however, sounds like a happy clappy bunch, so that is not the answer, but there is a need for a, I don’t know, somber, respectful, not religious way to do this.

No Mefiante: I speak of a true work of art: one that can serve as a guiding light for lost souls (sorry…none around) and contains moralistic principles a la commandments to help those in need (what are the beliefs of atheists anyway?). I speak of Psalms and verses that ring in the mind of humanists and raise them to new existential heights: I speak of prophecies that reflect scientific thought and rationalism.

I wrote ten commandments of an Atheist some years ago but lost them due to computer losses… >:( they were quite different from those espoused by Dawkins et al…for example they addressed inter alia the dilemma of why humans are so cruel to their own species…is this a outcome of our consciousness???

Anyway in the lighter vein of the atheist churches (the mere thought is disgusting) I think SITP is the seedbed of such.

Can’t make my mind up about this thing. No doubt such a secular church could ease the transition for some doubting Thomases wishing to try out atheism by preserving the familiar social aspects of churchgoing. A semi-formal, warm reception may be all that hundreds of budding atheists need to come out and play. But then, I also fear it may foster disbelief for the wrong reasons, if you know what I mean.

Speaking for myself, I was not much of a churchgoer even in my (relatively) religious days and found sitting in a pew for longer than five minutes just insanely, brain-meltingly boring. But then again, it could have been the subject matter, which was completely devoid of any stimulating scientific conjecture and pole dancing.

Now there’s an idea I could really “get behind”.

I wonder whether, if you join an atheist church, they expect you to spend Sunday morning knocking on people’s doors and giving them pamphlets while asking whether they have found Darwin yet…

I wonder whether, if you join an atheist church, they expect you to spend Sunday morning knocking on people’s doors and giving them pamphlets while asking whether they have found Darwin yet…

I’m sure that a sect will soon split off advocating the pivotal importance of its members going forth unto the god-fearing with an Indifferent News Bible and a Blind Watchtower tucked underneath their impeccably sleeved arms.

I listened to a podcast from the Thinking Atheist last night. It was an open discussion with Matt Dillahunty, Jamila Bey, AronRa and Seth Andrews titled Holiday Heathens. At one stage in the discussion the question of the Atheist mega churches was discussed. Either Matt or Aronra spoke about visiting one such gathering and the explanation paints a very different picture those in the media.