HELP! Windows 8 is going to kill me

Jisses bliksem fok! I loaded MS Windows 8 on my laptop (Windows 7) abt 4 weeks ago and started having untold shit with the laptop…like letters and cursor moving involuntarily. The installation then deleted all programs that I had downloaded (Freeware) and I was totally unable to upload and activate Outlook (MS Office 2010) which meant that I had to access my emails via MWEB site…unwieldy etc. Then yesterday I load Quickbooks 2013 that I bought and everything crashed! Afetr abt 2 hours the laptop decided to start-up as a new user, went back to Windows 7 that must have been lurking somewhere, Windows 8 disappears, all software disappears again. I suspect the disc has been partitioned??? As a bally, how do I recover all my files again (I am comfortable to leave it on Windows 7),

I’m not sure if it created a new partition, I doubt it, but you can check here (don’t create/delete/change ANYTHING here, just look, you’ve been warned):

In here you should see your drives, and what partitions appear on them. If there’s only one, there’s no other partition.

What is more likely, is that Windows decided to roll back to “the last known good configuration”. In this case what it does is keeps a lot of your old operating system files around in case something goes wrong. If it does (and it’ll actually have asked you, maybe you remember doing this?) it can roll back to an older configuration. In this state all new software you installed since that point will be gone, but your data files should still be around somewhere.

Have you tried looking for your stuff under “My Documents”?

You also mention logging in as a different user? This means you get a “new” Documents folder that’s empty, but the documents for the other user should still be there in their own “My Documents”. Go to your current “My Documents”, then up a directory, or two, where you should see folders for each user on the system. You can then browse into the folder for the “old” user (at this point windows should ask for administrator access, since it’s not “your” stuff. Or you might need to open explorer “as administrator” (right-click menu) to get access).

I’m afraid I can’t help with this geek stuff other than to commiserate. It seems to me that since Windows 3, every version of the software (and every version of MS Office) have been getting progressively worse and more user-unfriendly. Soon one will simply have no other choice than to switch to something else.

As it is I have already abandoned MS Office in favour of OpenOffice, which can do all the same stuff but is vastly easier to use and can be downloaded for free.

What’s also possible is that you’re NOT “back” on windows 7, but that your new user is just set up to see the “desktop” part of windows 8, which looks similar to 7. The trick about finding the “My Documents” for the other user still holds in that case.

Once you get going again, save all your data files in “Dropbox” or a similar program. It stores an automatic backup in the cloud so you can get to your files from another computer. It’s free for the first 2 gigs or so.

Ok that does sound a bit weird. It is “partitioned” yes. You should have both a c: and d: drive available. But there seems to be a 3rd partition that is not mounted. PM me a screenshot of that window so I can confirm? I re-iterate, don’t try to do anything with it, it’s bound to end in tears.

At this point, I’d try to think of the name of one of your docs that’s gone missing, and search BOTH your C: and D: for it.

Open “Start”->“Computer”->“C:” then type the name you’re searching for in the search box located at the top right. If you don’t find it (and probably with it all the other missing files), try again on D:

I’m afraid I can’t help with this geek stuff other than to commiserate. It seems to me that since Windows 3, every version of the software (and every version of MS Office) have been getting progressively worse and more user-unfriendly. Soon one will simply have no other choice than to switch to something else.

As it is I have already abandoned MS Office in favour of OpenOffice, which can do all the same stuff but is vastly easier to use and can be downloaded for free.

I abandoned Windows about fifteen years ago in favour of Linux (Mandrake, then Suse, then Ubuntu). It’s such a pleasure to have a PC that’s stable, virus-free, and all the software you could possibly need is there to download free of charge. My late father used to piss me off by phoning for support three times a week because he was too lazy to press F1 to get help. I installed Ubuntu on his machine (without telling him), showed him how to navigate the menus, and the support calls dried up to the point where I thought I had offended and been written out of the will. I will never allow a Microsoft product to infest a computer I own.

I’m a 100% certified Linux fanboy. It’s all I use at work, various flavours of it for the last… 10 years? something like that.

However I’m also a gamer and I use windows at home for that purpose. To be blunt, Windows 7 is by far the best OS they’ve released. It’s really not that bad to use, and I’ve had minimal issues with it (I have a monster PC though, YMMV). I’m not a fan of windows 8 though (and this thread is just another nail in that coffin).

However, Fanboy-ism doesn’t mean I’m blind. Linux has it’s faults and can cause problems for the novice user if they don’t have a technically minded person to fall back on. Windows has the same issue, yes, but there are far more windows-minded people out there that could possibly help.

Luckily for me, my father is a technical person himself and decided to switch to Ubuntu on his own, and hasn’t needed any assistence yet. Mine is a blessed life.

I installed Ubuntu on his machine (without telling him), showed him how to navigate the menus, and the support calls dried up .
[/quote]
Maybe he just stopped using the computer after that

I’ve gone on to Windows 10 Home now from 7 Pro. Now I can set my display either at 75% the size of the monitor, which renders it sharp, or I can select a full size, but fuzzy picture.

Sounds like your monitor and operating system and/or graphics drivers are not communicating their capabilities that nicely and are thus using incorrect resolution settings for the monitor. Most modern LCD monitors will compensate by “stretching” the picture to fit the screen, but this results in a blurry picture.

Something else can be happening on the other setting: When you see black borders around the screen it is often the result of underscan (there’s lots of info about it on the web). The converse is you have the edges of the picture clipped off: Overscan. Both of these are a symptom of many “PC” monitors these days being based on home-theatre/TV technology: HDMI.

So to start from scratch:

What make and model monitor do you have? Is it possible to tell? What type of cable connects it to the PC? (If all else fails take a picture)

EDIT: My first guess would be DVI: https://upload.wikimedia.org/wikipedia/commons/3/37/Dvi-cable.jpg

My monitor is a Benq GL955A, around 18". The cable ends on the monitor side in a male plug with 15 pins, arranged in 3 rows of 5. It has two screw fasteners on the side.

(Thanks for the help, Boogie, although it wasn’t my intention to come here for free advice. At least not conciously… ::))

Sounds like a classic DSUB, I see it’s all your monitor supports.

Next move: Check driver. So either:

(a) Go to the website of your graphics-card manufacturer and install the latest driver for your GPU.

OR If the above is written in greek, the easiest way for you to give me pertinent information is to:

(b) Download and run GPU-Z and tell me what it says under “Graphics Card”->“Name”. Or best option: screenshot the entire window. 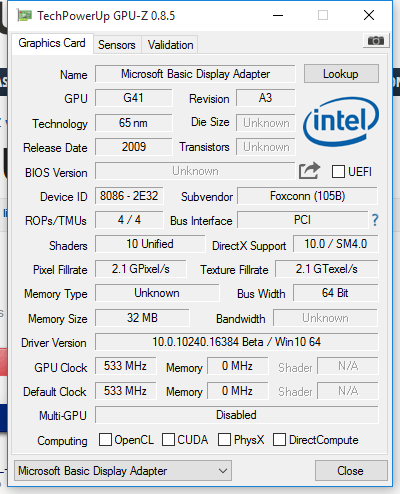 Okay. This means you have an intel graphics accelerator, specifically the G41 chipset.

And what is happening is Windows 10 does not support this hardware out the box, and is using it’s own “generic” driver instead.

It is VERY likely that we can fix this …

Download the file on Intel’s own site (Note it’s 40MB). Where you can see they specifically mention that their users have problems relating to display resolutions and this driver was released specifically to fix that.

You will probably have to extract the ZIP file, go to your Device Manager, and install the driver like this.

Hardly, but it helps knowing where to look. Glad you’re sorted.

Ok, here is one for the boffins. Not serious, but annoying. Since I loaded Win 10 the screen on my laptop goes dark when I change the power input, when I go on battery or back on power. I have to take the power cable out again, put the computer to sleep, put the cable back in and start it up again. I also lose my mouse (touchpad) if I close the lid. The setting is to do nothing if the lid closes. Again I have to put it to sleep and wake it up to get the mouse back. Any ideas? Like I said, annoying, but I can life with it.