Received via Whatsapp earlier this morning:

Thieves are putting Jeyes Fluid, tin foil, and a little water in plastic drink bottles and capping it up - leaving it on lawns, in mail boxes, in gardens, on driveways etc. just waiting for you to pick it up intending to put it in the rubbish, but you ll never make it!!!

If the bottle is picked up, and the bottle is shaken even just a little - in about 30 seconds or less it builds up enough gas which then explodes with enough force to remove some of your extremities.
The liquid that comes out is boiling hot as well. Don t pick up any plastic bottles that may be lying in your yards or in the gutter, etc.
Pay attention to this: A plastic bottle with a cap. A little Jeyes. A little water. A small piece of foil. Trying to disturb it by moving it - and BOOM!!
No fingers left and other serious effects to your face, eyes, etc.
Please ensure that everyone that may not have email access is also informed of this.
Kol. Cor Snel
PRETORIA

ETA: OK, I’ve now made the mixture as per the recipe above. It is well known that Aluminium (foil) will react with strong acids and bases and give off hydrogen. But Jeyes Fluid contains tar acids, of which I know nothing. They do sound kinda organic, though, and as such cannot be very strong. Nevertheless, herewith my results:

I’m going to shake the mixture in about an hour’s time. If you don’t hear from me again, kindly consider the Whatsapp message validated.

What does the chemist in you say? Possible?

What does the chemist in you say? Possible?

The chemist in me says check it out in a test tube. The skeptic in me says phone the colonel and ask why a thief would want to blow me up. The introvert in me says re-post the message on a forum to garner anonymous support.

I hereby express my incredible admiration for this application of solid investigative skepticism and good old-fashioned curiosity to deliver a takedown of delicious proportions.

Although I suspect Mr. Kent already knew what the outcome would be… ;D

A quick google tells us this has been around since 2013. People can be so bloody dramatic.

Although Snopes has a different opinion. 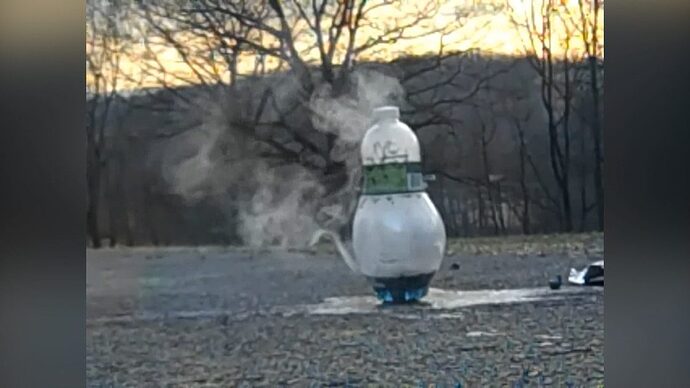 Thanks Mr Faerie. (On the downside I did receive some static from an undisclosed source unhappy about the state of her kitchen island.)

Faerie, thanks for the link. The Snopes article makes mention of Drano, which is a different animal than Jeyes Fluid. Drano contains sodium hydroxide, a very potent base. Mixing that with aluminium foil will certainly liberate lots of hydrogen, which can either make a bottle pop due to the pressure building, or, if you are particularly unlucky, ignite. Jeyes Fluid with its tar acids on the other hand is evidently much milder.

Perhaps in translating the warning for South African consumption, drain cleaner was replaced with Jeyes Fluid, the latter being used as a drain deodorant.

You still with us Rigil?

Pity this is’nd working. There is a house in Nkandla with a lawn that just begs for something like this. But think more Fight Club scale.