Last year the missus and I were browsing through the merchandise available at a regular local flea market. We stumbled upon a pretty little kiosk decorated with all sorts of stones, minerals and tumble-polished semi precious stones from Namibia, and hand-made creations featuring the same. Since parents are programmed to nurture their kid’s interests, we decided on purchasing a rock for our son. He likes collecting stuff. Primarily sedimentary and igneous thingies and, slightly more disturbingly, abandoned bird’s nests and animal skulls. The item at the flea market that caught our interest was a night light made by fitting a 5W globe into a drilled-out lump of rose quartz and plonked on a small wooden pedestal. Depending on whether you are inclined towards the geological or the decorative, the lamp could be described as either ingenious or hideous.

Not being his birthday or Christmas, and not having been particularly well behaved that week, the kid was surprised and thrilled by the gift. It was un-bagged immediately and did service on his nightstand for a few weeks. Then the weird stuff started. Every morning a small puddle of water collected below the lamp. This continued night after night, and I noticed that the rock itself started to look somehow, well, more rounded than its original angular and chiselled shape. Fearing a short circuit, I disconnected the weeping night light and tucked it in a cupboard.

Then, many moons later, I noticed small white crystals forming on the wooden pedestal, and the penny dropped with an A-ha!: the lamp was not made from a real lump of quarts at all, but a large clot of dyed salt!

While I have to admire the technical skill of the forgerer, I also have to wonder about the value of faking rose quartz, a very cheap mineral at the end of the day, even when fashioned into prime kitch.

But most importantly, I now know why geologists lick rocks.

You should immediately start using the lamp again - it’s good for your health: 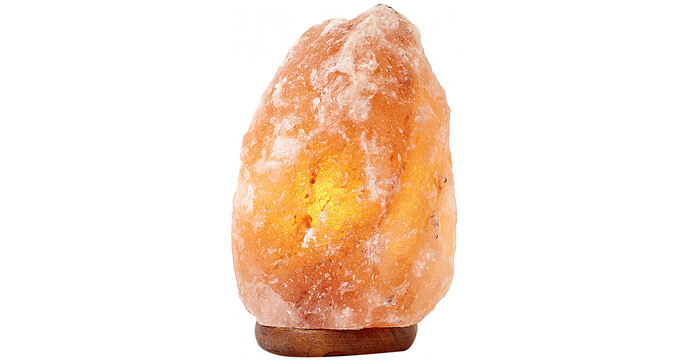 Light up your home and enhance your family’s wellbeing with the welcoming glow of a natural Himalayan crystal salt lamp from Universal Vision.

And speaking of Himalayan salt, I wonder how much of it is actually just common salt with a bit of dye added…

That’s exactly the object of our frustration - thanks for the link! I don’t know what is worst: being the owner of a fake chunk rose quartz, or a bona fide woo-device. Oh well, I’ll just chuck it in the same cardboard box where I keep the my E-meter. :-X

Interesting, so the question then is, was it labelled or did you assume?

That’s exactly the object of our frustration - thanks for the link! I don’t know what is worst: being the owner of a fake chunk rose quartz, or a bona fide woo-device. Oh well, I’ll just chuck it in the same cardboard box where I keep the my E-meter. :-X

Or you can grind it up and sprinkle it over breakfast…

Interesting, so the question then is, was it labelled or did you assume?

Proper labels and packaging are not common in the world of flea markets, but Mrs Kent recalls that she asked the vendor if it was rose quarts and was told yes. Also, to me it looked liked quartz and quacked like quartz so I had little reason to doubt the man. Also, until reading Brian’s link I was unaware that these luminous salt creations are made! Next time I’m licking the rock for sure, never mind who is looking.

I had no idea about salty lamps either. “The more you know”

I didn’t know about salt lamps either. I stumbled upon the link when I Googled “Himalayan salt.” The woo is strong with that one.

How much did you pay for your lump of salt? Im attempting to wrap my head around the fact that someone spends time to make this to flog cheaply?

How much did you pay for your lump of salt?

Well, the lump of salt is after all also a mineral, so if you can disconnect it from the lamp, it can still go into the kid’s collection…

How much did you pay for your lump of salt?

Ouch… well, someone was able to buy a bottle of brandy for a Saturday night…

Next time I’m licking the rock for sure, never mind who is looking.