Why some patients prefer Homeopathy over Allopathy?

[ol]- Holism (or perhaps “wholism”) being the watchword of quackery that deceives patients into believing that the laws of nature can somehow be suspended on their account.

A study reported in the Journal of the American Medical Association found that conventional drugs kill about 106,000 Americans a year, and this figure is limited to patients that die in the hospital, so the actual figure is unquestionably much higher. That makes prescription drugs the fourth leading cause of death in the United States (after heart attack, cancer and stroke).

6.There are number of diseases which are labeled as ‘surgical’, where homoeopathy works curatively and can avoid surgery except where tissue changes have occurred, or where there are congenital abnormalities.

Talk about a sure thing - “tried and tested on healthy human beings”. Treat someone without a backache, and after completion of the treatment…no backache! Powerful stuff.

Tried & Tested means: Homeopathic medicines (prepared from many natural substances such as herbs and minerals) used in the times (200 yrs back) of Dr. Samuel Hahnemann (father of homeopathy) are used even today because of their efficacy

Tried & Tested means: Homeopathic medicines … used in the times (200 yrs back) of Dr. Samuel Hahnemann … are used even today because of their efficacy

It seems you missed wandapec’s joke, but what you say is in any case not true. The reason these nostrums are still in use today is that they remain just as ineffective as they ever were and the level of people’s gullibility hasn’t changed much in 200 years, so the homoeopaths have kept on prescribing them. In that sense, homoeopathy is a bit like a doddery old aunt of medicine who keeps spreading old wives’ tales that impressionable people take as being “tried and tested.”

Does this article suggest a slow public dawning of sanity regarding homoeopathy? (“The public” in this context should be read as excluding homoeopaths and other woo-woo practitioners because these will continue bleating their tired litanies more or less undisturbed. In fact, the article says as much about the UK’s British Homeopathic Association, which organisation maintains, in typical homoeopathic fashion, that a 40% drop in homoeopathic preparation sales is “not evidence” that GPs are steering away from homoeopathy. It seems they would find a drop of 0.000,000,000,000,000,000,004% more alarming.)

A cousin of my wife, (a Microbiologist nogal) believe in homeopathy. Now being a mere matriculant I may not argue with her, a scientist! My views are uneducated and besides it “Works for her”. She was diagnosed with cancer a while ago. Where did she go? Good old Western Medicine and, hurry, the last two sessions with the doctor show her to be OK. Being modest I did not say anything.

A link to a woo-woo forum thread where the opening author rejects modern medicine in favour of ancient superstition, a paper by an Indian homoeopath published at a Polish homoeopathy website which paper actively promotes the withdrawing of cancer patients from their radiation and/or chemotherapy regimens, a list of homoeopathic preparations with very few indications sprinkled in here and there, and last, but certainly not least, a broken link, presumably to some homoeopathy book by a person called Dr Ramakrishnan.

My point is that some patients prefer homeopathy over allopathy. And the numbers have kept increasing especially in the last decade. But why? Is it homeopathy has suddenly showed more efficacy or it is a faliure of allopathy that some people are turning away from it because of some reasons. One potential reason I am sure of is lage side effects, sometimes resulting in deaths.

Maybe you should be a little more diligent about actually reading the things written by others who don’t share your view.

It’s just a suggestion, though.

Another suggestion is that you shouldn’t lose sight of the deaths attributable to homoeopathy’s ineffectiveness.

A study reported in the Journal of the American Medical Association (JAMA) found that conventional drugs kill about 106,000 Americans a year, and this figure is limited to patients that die in the hospital, so the actual figure is unquestionably much higher. That makes prescription drugs the fourth leading cause of death in the United States (after heart attack, cancer and stroke).

Just one single drug, Vioxx, killed more Americans than the Vetnam War. That comes from the sworn testimony of Dr. David Graham, a senior scientist at the FDA.

The JAMA says that drugs kill over 100,000 patients a year and this is with prescribed and directed use. Anothe one and a half million are hospitalized for the side effects.

JAMA says that 50% of the operations are unnecassary 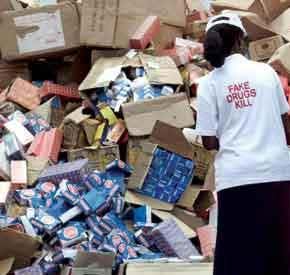 The medicines that could kill millions

This is the third time you bring this up. Again you write as though such failures, while tragic, are (a) completely avoidable, and (b) characteristic of conventional medicine. How many more people would perish without conventional treatment?

And how, please, do these failures in any way validate homoeopathy? Because pointing out the failings of your competitors doesn’t demonstrate anything concerning the soundness of your alternative. Arguing in such a way is no less than presenting a false dichotomy.

Yup, I’m getting quite tired of these bad repetitive arguments from “Dr Nancy Malik”. The web is littered with her stupid posts. Just google her name and see for yourself. I’ve been quite patient up to this point, but I don’t see the discussion getting anywhere. And it’s not even related to SA at all. So until you have some groundbreaking new evidence or arguments, Nancy, I will move your posts to somewhere more appropriate.

The newscientist.com link she posted is not even related to her argument. It’s about the dangers of illegal fake medication. She is either not able to grasp the difference or she didn’t bother to read her own link. For reference, the JAMA paper she mentioned can be read here: http://jama.ama-assn.org/cgi/content/full/279/15/1200?ijkey=F8guE.zA8WYTs and the wikipedia article has the full story on the withdrawn medication Vioxx

It’s simple. Modern medicine is a complex field and because it affects the body in substantial ways, it can be dangerous if not completely understood. If used properly, the benefit far outweighs the negative though, and that is why people still use it.

Homeopathy on the other hand (I’m talking about properly diluted homeopathic preparations), is nothing but sugar pills and water. It is therefore no surprise that it can’t adversely affect people. That is not disputed. But it won’t cure any serious illness either. Yet homeopaths prescribe these preparations to patients with serious illnesses.

To answer the topic’s question: “Why do some patients prefer homeopathy over real medicine?” Because they don’t know any better. And on the surface homeopaths present themselves as real doctors, so theres little reason to doubt their claims.

In it’s over 200 year history, there has been no significant progress, no repeatable studies to show that it works and no proper theory as to how it is supposed to work. The only people still clinging on are people like Nancy Malik that obviously have little understanding of the basics of chemistry and it’s effect on the human body.