Atheism and the army

The US army and accepting atheists, they just had the don’t ask don’t tell in relation to homosexuality so at least this is out in the open… I think this article raises a lot of questions… 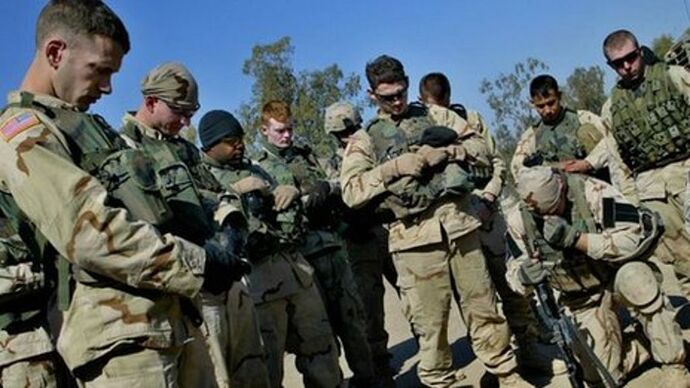 Can the US Army embrace atheists?

Can you fight for your country without fighting for God? (both sides are fighting in the side of God supposedly)
Surely if they didn’t accept atheists that is highlighting warmongering in god’s name?
Are atheists less patriotic?
Are they more likely to be pacifists? ( I think yes)

Can you fight for your country without fighting for God? (both sides are fighting in the side of God supposedly)
Surely if they didn’t accept atheists that is highlighting warmongering in god’s name?
Are atheists less patriotic?
Are they more likely to be pacifists? ( I think yes)

Does being in the army really mean one is ‘fighting for your country?’ or for god or some other ‘higher power’? Surely if you are the war-fighting military type, you could just be fighting for what you think is right (morally, not because of what the bible or koran or whatever says…) Additionally, in joining the army (as I understand it from a friend of mine who serves in the Navy) you pretty much can’t decide anymore what you want to fight for/against. You basically have to do what your boss tells you to do (sounds like any other job to me… although mine doesn’t give me a firearm)
So many wars have been fought ‘in the name of god’. But war is not the only thing where religious people justify their terrible deeds by citing the bible (or other religious text)
I think some atheists might be less patriotic than the standard ‘for god and country’ types. But as I understand it the military is tasked with protecting the citizens and assets of the country they serve - there need not be any reference to the religions of those in the military (nor to their sexual preferences).
Lastly, in terms of ‘spiritual health’ making one a better soldier - that just makes no sense to me. The christian believes that if he/she dies they will be judged and maybe go to hell for all eternity, no second chances, no questions asked. Dying as a soldier presumably means that you have killed people (big no-no). the atheist believes that if you get killed in war, you will be dead. Much more motivation for the atheist to stay alive if you ask me…

The naïve underlying assumption is that the presence of atheists in an army will corrupt it in the eyes of the applicable god, i.e. this god will not favour the army with victory and success if is “contaminated” by unbelief. Therefore, any unbelief in its ranks is hazardous to the army and must be eradicated.

It’s a reflection of the essential insecurity that prompts religious belief in the first place.

if you are a soldier by choice, as is the USA, then it’s a career. not a calling. by god or anyone else.
then you do what you are told. and kill who you are told to kill. christian or otherwise.

if you are a soldier by choice, as is the USA, then it’s a career. not a calling. by god or anyone else.
then you do what you are told. and kill who you are told to kill. christian or otherwise.

Is this not an accident of birth as much as religion tends to be?

I agree but I live in your country not my own because I don’t like it there. But while I love living in SA I wouldn’t fight for it, because I wouldn’t fight in the name of any country. I’m not sure if many people like the politicians anywhere…?

beLIEf, I’m with you on that one. I think that patriotism - the notion that one’s country is superior due to the fact that you were born there - is quite dead.

I have a pet theory that war is driven not by a love for the own, but rather by hate for the other.

My affection for South Africa is limited to its awesome natural wonders, agreeable climate and interesting peoples. My concerns about local issues political, criminal, educational and fiscal run equally deep.

But if I had to fight voluntarily for the country, it does not shame me any longer to say that it would have to be in the capacity of an extremely well paying job. Preferably as a member of the Sarcastic Retort Corps.

Not to worry: I don’t think we are going to get embroiled in a war any time soon.

Where are you originally from?

I also would not fight for the country unless I was paid very well. That’s why they got us young in the days of National Service. I think we were paid something like R20 a month that was increased to R120 after a while. I got danger pay, an extra R40 I think. You had to polish your boots, shave and so on but the pay hardly covered that. Back then we didn’t think, it was just something you had to do after school.
Now I would not. I will fight for my family. If that means joining the army, so be it, but not for the country. Now I know that you would be fighting for some politicians and their friends who of course will not be fighting. Love it here but I think living in say New Zeeland would also be OK. Not Australia though. The whole country is full of Australians and that would be to much.

Patriotism: I’m an independent person first and a “south african” very last. I subscribe to the Doug Stanhope [comedian] stance on the issue: “Nationalism does nothing but teach you how to hate people that you never met. And all of a sudden you take pride in accomplishments you had no part in whatsoever …”.

Basically, I’d need a very righteous (as in, morally) cause to fight for and trust in my leaders (as if) to be moved to fight any kind of national war. Other than that I’d be willing to kill if there was a clear threat to the security of the country that would clearly be detrimental to me. Say, an african nazi-analogue who comes to cleanse SA of all my kind. So, you could probably have found me fighting on the border in the 70’s, but not in afghanistan in the 00’s.

The Americans I’ve met are fiercely patriotic though. I’d go so far as to say that their state is their 2nd god, with all the indoctrination the state can possibly throw at them. I’m not at all surprised that even some atheists in that country feel moved to fight for it. And hey, why not, someone has to do it.

I don’t think any army run by and with volunteers can afford to turn otherwise capable people away.

i would fight if an invader is threatening my life, my home, my pets, or my freedom. if an invader is going to continue with business as usual, then i dont particularly care.
say, if china invaded. they would propably do the country good (hypothetically speaking).

Not to worry: I don’t think we are going to get embroiled in a war any time soon.

Where are you originally from?

I’m from wales, just been in SA over a year.

I agree that patriotism is all about people thinking their country/ ideology is better than everyone elses.

I’m just here for the weather

Patriotism is the last refuge of the scoundrel.

What Johnson meant is that “patriotism” is often invoked to cover up or excuse misdeeds prompted by self-interest. Patriotism is like religion in that it is frequently used as a cudgel to promote a divisive us-and-them worldview. Without patriotism, there couldn’t be any frictions along lines of nationality. In fact, there probably wouldn’t be any nationalities at all.

Collective aggression is dependent on the existence of a group identity. On a large scale a shared identity is a prerequisite for warfare. John Lennon dreamt about a world free of certain types of group identity:

Imagine there’s no countries
It isn’t hard to do
Nothing to kill or die for
And no religion too
Imagine all the people living life in peace.

Other group identities may be based on race, tribe, family, language, culture.

Collective achievement (which is essential) is dependent on the existence of a common cause. Common causes can also give rise to group identities or may favour an existing group at the expense of others.

Group identity can therefore act in a beneficial or detrimental way.

I well remember going on an all night route march during basics and being made to go to the gym afterwards in a state of exhaustion. The chaplain made a speech there, waving a 9mm in one hand and a Bible in the other. Even in my exhausted state I knew that this was all bullshit, but looking at the faces of the others I saw that they were lapping it all up, buying the whole deal hook, line and sinker.

I have since discovered that this is a common means of trying to boost conformance to a group identity–a form of brainwashing. I resent like hell that they tried to do that to me.

Has anybody ever taken a gander at the US army’s ‘don’t ask, don’t tell’ policy as it’s worded in their Initial Entry Training manual (you can get a copy from fas.org).

It’s bloody disgusting, and so typical. Supposedly, the army states they are not interested in the sexual orientation of soldiers, and that it is a private matter. In the same breath, the document states that ‘homosexuality is incompatible with the goals and directives of the United States military’, without explanation or reasons given. It’s simply an assertion and that’s that.

God, that country is such a backwards fucking shithole.

Has anybody ever taken a gander at the US army’s ‘don’t ask, don’t tell’ policy…

I don’t think it applies anymore. Obama overturned it a while back, if I recall correctly.

‘homosexuality is incompatible with the goals and directives of the United States military’, without explanation or reasons given.

I don’t need to give you a reason soldier. I’m in charge and I said it and you will believe me, understood?

“The Army” isn’t into explanations and reaching consensus. It needs a culture of absolute obedience to work.

I do not think you are correct here.

Love for country is as irrational as love of religion. Atheists are, far more so than the general population, skeptical of emotional and cultural motivations. Patriotism is about forming in and out groups, conforming to a mindless loyalty.

South africa is a mix of cultures. What made sense in the past, up to WWII, the defence of a country because it represented the survival or death of a culture, world-view, history, and way of life, no longer makes sense.