Atheism is a psychosis

Well, there you have it:

Clearly, half of western Europe’s population will have to be confined to asylums, for their own good…

The article starts off with

The presence of God is surprisingly easy to ‘sense’ and thus prove.

and surprisingly, the logic goes even further downhill from there.

atheists appear as prisoners in a glass box ... All they have to do is smash the glass and step into the light.

Now the [i]scientist[/i] that the writer lashes out against would make this metaphor actually work by constructing the hypothetical box from, say, earthenware.

Stephen Townsend’s comment below the article hits the nail on the head.

Jasper.Jiggins and most of the rest of the god squad using MyNews24 as a pulpit are strictly worth only a slight upturn of the corners of the reader’s mouth and perhaps a shake of the head. The philosophical barrenness, intellectual sterility and scientific naïveté of their scribblings are amusing in the same sort of way that overt hamfistedness can sometimes be.

On the upside, have a look who gets the lion’s share of the thumbs-ups and who the thumbs-downs in the comments. The readership sees right through these clowns.

Jasper.Jiggins and most of the rest of the god squad using MyNews24 as a pulpit are strictly worth only a slight upturn of the corners of the reader’s mouth and perhaps a shake of the head.

I don’t know why I bother to ever read News24. It usually just depresses me. Very often the comments below the articles are the most depressing aspect of the site: an endless litany of complaints and authoritarianism and anti-science like you’ll be hard pressed to find on fundamentalist websites (which at least often reflect a sort of zany, Ed Wood-like optimism).

I have managed to wean myself off “news” a bit, mind you. Nowadays I tend to mostly just scan through the headings so that if something important pops up, I’ll take note of it. And then, when a heading is particularly provocative or juicy, I might open up the article and take a look.

And sometimes I just can’t resist the “health news”: it can be very amusing to learn that this or that is “bad for you” or can cause or prevent cancer.

Completely off topic, brianvds is that pencil(charcoal?) sketch you own work? … Looks pretty professional.

I also feel profoundly sad when reading this stuff, especially the comments. But fuckit: The stupidest are the most vocal.

The weird thing is I’ve read so much of this garbage that the biggest objection I have to this article is the use of the word “irony”. In that it applies, but not in the way he thinks.

Completely off topic, brianvds is that pencil(charcoal?) sketch you own work? … Looks pretty professional.

Yes, it’s a self-portrait, and thanks for the compliment. My drawings and paintings always seem monstrously amateurish to my own eyes, so you are doing something for my ego there.

Incidentally, I am not really that unfriendly; it’s just an effect of staring intently into a mirror. Here’s a larger version: 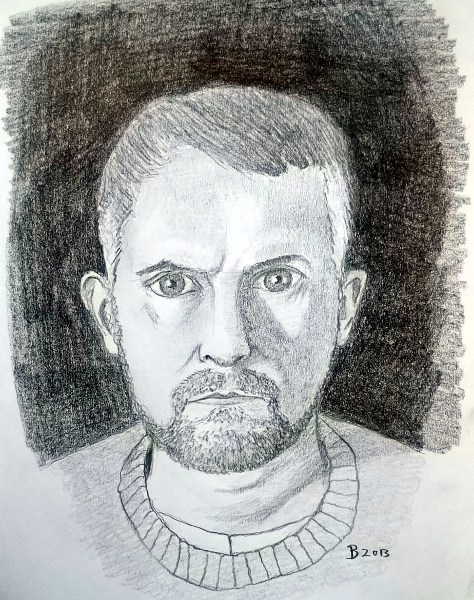 More of my amazing masterpieces can be viewed on my blog: http://brianvds.blogspot.com

Well, there you have it:

Clearly, half of western Europe’s population will have to be confined to asylums, for their own good…

I don’t bother reading mynews24, a waist of time, and comment sections on site reminds me of speakers corner in London filled with nut bags.

I don’t know why I bother to ever read News24.

There’s a difference between News24 and MyNews24. The former is written by what passes these days as professional journalists and editors, whereas the latter is written mostly by unqualified retards with self-esteem issues. A cynic might argue that, at bottom, they’re really the same.

Blame it on the government’s stellar success in actively crippling people’s basic education.

Goodness, some really good stuff there, brian! Who would have thunk that such talent lurks among us. 8) My faves: the blue bottle and tomato, and the robot thingy with the banana.

Goodness, some really good stuff there, brian! Who would have thunk that such talent lurks among us. 8) My faves: the blue bottle and tomato, and the robot thingy with the banana.

Well, it’s a work in progress. 25 years ago I could barely draw stick figures, so I decided to find out whether it is possible for someone with no more than average talent to learn to draw. Evidently one can, to some extent, but I don’t think I have ever done anything so difficult or frustrating, and even after more than two decades, I am nowhere remotely close to the kind of skills I have seen displayed by some in their teens. 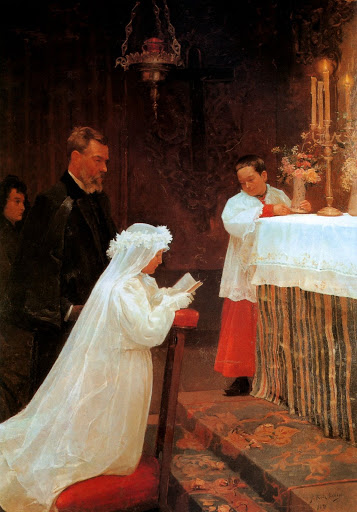 Call me skeptical. That looks nothing like anything Pablo Picasso would do. Is this some other Picasso?

IMHO your stuff is way more skillful (of maybe not as high concept) that even his most famous works.

That looks nothing like anything Pablo Picasso would do.

Picasso really could draw and paint as well as any artist ever. People usually forget this about him because of the abstract stuff that made him famous. Have a look at his early pencil sketches. They are truly impressive.

Call me skeptical. That looks nothing like anything Pablo Picasso would do. Is this some other Picasso?

Nope, the famous Pablo. He received his early training in the classical tradition, from his father, and achieved fairly solid skill in it.

IMHO your stuff is way more skillful (of maybe not as high concept) that even his most famous works.

Actually, doing the kind of stuff he ended up doing is not nearly as easy as it may appear (as I found from personal experience some time ago when trying to make a copy of one of his pieces for a friend of mine). For one thing, it requires a significant ability to work from imagination, which is an ability I lack more or less completely: what I cannot see, I cannot draw. Furthermore, the child-like appearance of some of his work is only apparent. Having a bit of experience in drawing, it is pretty clear to me that he possessed a detailed knowledge of human anatomy, and a highly skilled and confident hand when it comes to drawing.

Not that I am completely credulous either when it comes to modern art. Much of it is indeed an utter con game, so much so that perhaps it deserves a whole thread here on SA Skeptics.

You may find this site particularly entertaining (on art message boards I belong to, it has stimulated much in the way of very angry debate):

Something to keep in mind in the case of Picasso is that he produced a titanic amount of work, much of it experimental and inevitably including lots of failed experiments. He himself put relatively little of it on the market, and finished and half-finished and abandoned failures accumulated in his house. When his house started overflowing with the stuff he would simply buy a new house (or so it has been said).

After his death, all of that stuff became commercially very valuable, but it is a good question how much of it he himself would ever have considered suitable for exhibition or sale. Thus, what one sees tends to vary in quality from rather crappy stuff, to works that I find quite sublime. The piece I tried to copy for my friend was this portrait of his son Paul, and at least to my personal aesthetic, it is quite breathtaking: 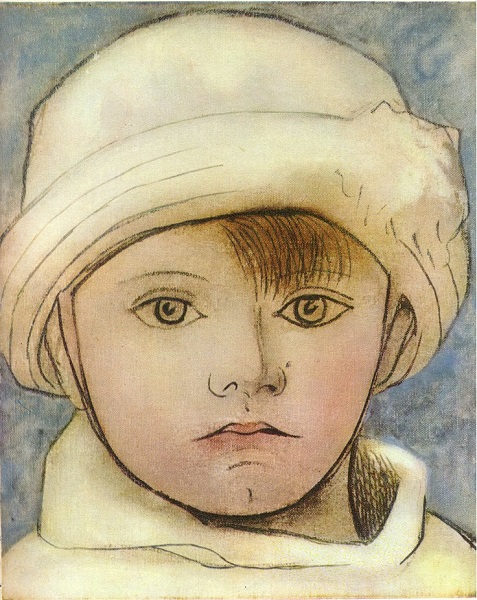 I find that in “serious” art and music (i.e. what one might call classical music, for lack of a better term) one nowadays runs into a problem. There is stuff out there that is genuinely brilliant, but that also really does require the viewer/listener to have some knowledge and/or skill to understand and appreciate. Thus, if someone dismisses Prokofiev or Bartok as so much incomprehensible noise, I can only shrug and assume the person just doesn’t know anything about music.

However! It now becomes extremely easy to play a con game here: one can make genuine random noise and if someone points out it is noise it is ALWAYS possible to say “well you just don’t have the necessary knowledge to understand it.” Of course the same thing can happen in science, but the arts are far more open to it because one cannot really test theories of art in the way you can in science. There is far more room for subjective interpretation.

Which is probably precisely why, in the arts, all kinds of utter horse manure can be sold as masterpieces, and artists, critics and a credulous public all cooperate to bamboozle themselves into seeing the emperor’s invisible clothes.

I don’t really know where one should draw the line between great art and bad art or non-art; whenever I draw such a line it’s just MY personal opinion too!

I can just imagine him being pulled over by a traffic cop.

You can browse Picasso’s extensive portfolio here (more than 1,100 works). Many of the pieces very clearly demanded the hand and eye of an exceptional artist.