An atheist stumbles into a deep well and plummets a hundred feet before grasping a spindly root, stopping his fall. His grip grows weaker and weaker, and in desperation he cries out, “Is anybody up there?”

He looks up and all he can see is a circle of sky. Suddenly the clouds part and a beam of bright light shines down on him. A deep voice thunders, “I, the Lord, am here. Let go of the root and I will save you.”

The atheist thinks for a moment and then yells, “Is there anybody else up there?”

Some scientists approached god and said “god we don’t need you anymore we too can create out of dirt.”. so the scientist reaches down to sweep up a hand full of dirt to demonstrate. God says… “Hold on… use your own dirt…” point made… 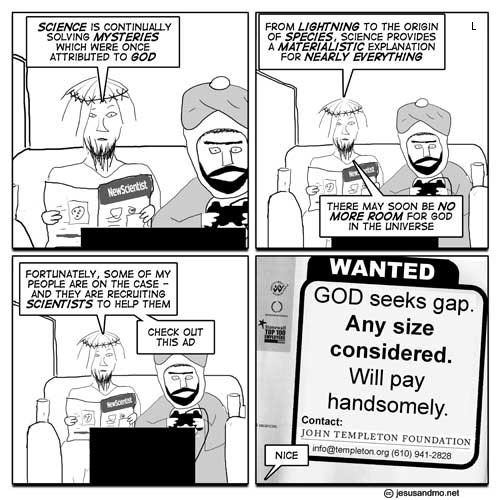 186 comic strips - some quite hilarious

Arguing with a creationist is like playing russian roulette without bullets. It’s pointless, & you eventually WANT to blow your brains out. - George Hrab on twitter today.

A Worried Father
A Jewish father was troubled by the way his son turned out, and went to see his Rabbi about it. “I brought him up in the faith, gave him a very expensive barmitzvah, cost me a fortune to educate him. Then he tells me last week he has decided to be a Christian! Rabbi, where did I go wrong?”

“Funny you should come to me,” said the Rabbi. “Like you I, too, brought my boy up in the faith, put him through University, cost me a fortune, then one day he, too, tells me he has decided to become a Christian.”

“What did you do?” asked the father.

“I turned to God for the answer” replied the Rabbi.

“And what did he say?” pressed the father.