Beginning of the end of our energy problems?

If Joseph Zawodny, a senior scientist at NASA’s Langley Research Center, is correct, the future of energy may lie in a nuclear reactor small enough and safe enough to be installed where the home water heater once sat. Using weak nuclear forces that turn nickel and hydrogen into a new source of atomic energy, the process offers a light, portable means of producing tremendous amounts of energy for the amount of fuel used. It could conceivably power homes, revolutionize transportation and even clean the environment.

[…] According to Dennis Bushnell, Chief Scientist, NASA Langley Research Center, one percent of the nickel mined per year could meet the world’s energy needs for a quarter of the cost of coal.

[…]One area of particular interest is the environment, with the LENR reactor using carbon to run it, converting the element into nitrogen. According to Zawodny, this would be much better than sequestering carbon dioxide to control climate change, and could also be used to eliminate toxic carbon compounds by turning waste into fuel.

[…] All we really need is that one bit of irrefutable, reproducible proof that we have a system that works. As soon as you have that, everybody is going to throw their assets at it.

Kindof but different. I ran this past a physicist before posting it, he couldn’t find fault with it.

To quote the article again:

What Zawodny and other researchers are working on is called Low-Energy Nuclear Reactions or Lattice Energy Nuclear Reactions (LENR). In the late 1980s, it went by the name of “cold fusion.” Its proponents were light on theory and not very rigorous in experimenting. They thought that nuclear energy was being released by a chemical reaction, but this theory ended up being discredited. Today, not only the name has changed, but also the theory and the approach of the researchers.

So yes, but no. Guess we’ll find out eventually.

I’m skeptical about solutions that fix the all our problems in one go.
But I must say I hope it to be true. I hope my son one day has to say the words
"Honey call the LEN(a)R guy the thing is making that noise again. " ;D

If it sounds too good to be true it probably is. I am skeptical.

Another cold fusion story. http://www.universetoday.com/102398/cold-fusion-experiment-maybe-holds-promise-possibly-hang-on-a-sec/ As usual it is a bit short on the actual details. I am again sceptical.

Wind energy. I spend some time in the Eastern Cape last week and noticed more wind farms, one even at Noupoort, quite far inland. The turbines all have 3 blades, why not 6 or 8?

Basically, it’s a cost/benefit trade-off. Those big blades are pricey. Early wind turbines had just two blades but needed longer ones and higher towers for the same output. As more blades are added, the recoverable power output increases by diminishing increments because each blade induces turbulence that affects the efficiency of the nearby blades, and there’s only so much energy that can be extracted from a “unit” of wind. So, as you increase the number of blades, the cost goes up proportionally, but you get less and less improvement in efficiency. Three blades is pretty close to optimal in terms of capital cost vs. energy efficiency.

With wind-driven borehole pumps, the capital cost of the turbine impeller is a tiny fraction of the total installation cost, and so adding blades doesn’t materially affect the cost.

Thanks, that make sense. Another interesting thing is the speed that the tip of the blade is doing. Doesn’t look fast but a revolution takes about 2.8 seconds (my imprecise timing) and the blade is some, I can be wrong, 50 meters in length… I get about 400 Km/hour!

Some interesting reading here too. 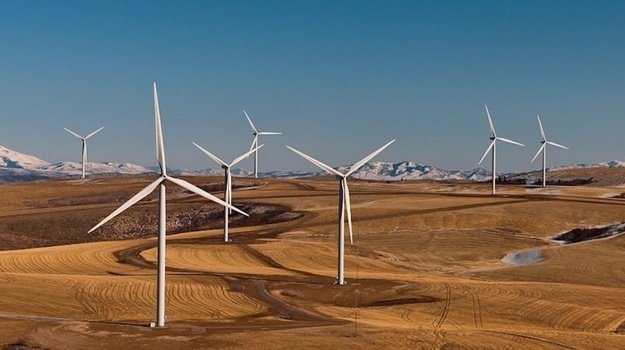 It is time for SA to break away from the vested idealistic or financial interest driving large renewable expansion schemes, says Econometrix MD Rob Jeffrey.