A Chinese airport was closed after this mysterious object was spotted in the sky.

Arcing over Zhejiang’s provincial capital Hangzhou, the UFO appeared to glow with an eerie white light and left a bright trail in its wake.

Xiaoshan Airport was closed after the UFO was detected at around 9 pm and dozens of flights had to be diverted.
Stunned witnesses reported seeing a comet-like fireball in the sky and a number of local residents took photos of the strange ball of light.

A local bus driver, giving his name only as Yu, said he had seen a strange glowing object in the sky late on Wednesday afternoon.

‘The thing suddenly ran westwards fast, like it was escaping from something,’ he said.

Some Chinese experts claimed that the strange sight was actually debris from a US intercontinental ballistic missile.

Chinese officials later said that they knew what the object had been but were unable to make it public because there was a ‘military connection.’

seems they have been quite busy over china this year

this one was supposedly later that same month

one guy recons it’s a situation of shutters being open for like a second, and it’s a plane taking off. or even a chopper with search lights on?
i can kinda see that. 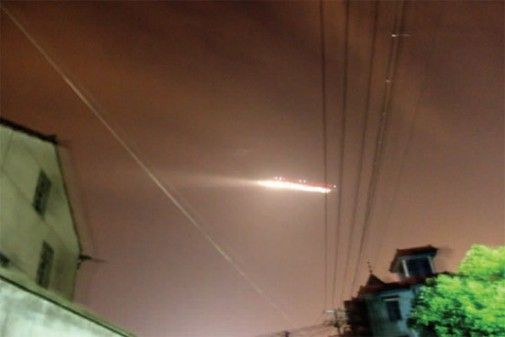 the same one, here i can see the building on the left has a shadow, so definitely some long exposure going on there.

this is a long exposure of a chopper

dammit. where are decent ufo vids and pics, that arent some geek with a science project and camera?

Don’t think it’s a chopper, they don’t normally leave a wake like that. I’d say a rocket, at about 35s you can see the wake move out in a circle, which looks a lot like when a plane goes through the sound barrier.

Yeah, Chang’e 2, but it was a few days ago. The UFO was seen on July 9. A quick search on Google News says that the government confirmed it was a military aircraft.
In September there was one over Mongolia, but the photo looks a lot more like a long exposure photo of aircraft.

i rarely give much attention to photos, since every fool can photoshop these days.
hell, i made a fake ufo photo with tippex, a window, and an old analogue camera when i was like 16.
videos are a bit harder to fake. there are a few supposed nasa vids which looks credible, showing something darting in and out of the atmosphere. when its something just floating around, hovering, or bulleting off in a straight line… then i dont pay much attention.
the speed and ascent angle of that vid, just makes me think of a rocket take-off. given the right atmospheric conditions, and viola!