On Dark Matter and Dinosaurs

Let me begin by saying there is no evidence that dark matter killed the dinosaurs. None whatsoever. Unfortunately the idea was posted on Nature’s blog, and from there it went to Scientific American and elsewhere. The various social media took the story and it has spread like a prairie wildfire. The actual preprint is much less sensational (and doesn’t mention dinosaurs) but it is still very speculative.

The idea comes from the fact that the Sun does not follow a flat orbit around the galaxy. Instead, its motion wobbles above and below the galactic plane, crossing the galactic plane every 35 million years. This isn’t unusual, as lots of stars follow similar paths, but it has led some to speculate that perhaps this periodicity could explain periodic mass extinctions in the geologic record.

The problem is, there isn’t any strong evidence for cyclic mass extinctions. Some analysis of the data has hinted at a pattern, but the correlation isn’t very strong. Of course that hasn’t stopped people from proposing everything from companion stars to Nibiru to explain these periodic extinctions. There been similar proposals that every time the Sun crosses the galactic plane the Oort cloud would be disrupted, causing comets to sweep into the inner solar system and bombard the Earth.

What’s new here is that the authors propose that dark matter within the plane of the galaxy is doing the disrupting. As I wrote about last week, there is a hint of dark matter seen in gamma ray observations of the center of our galaxy. One model that could account for these gamma rays is type of dark matter that would lie within the galactic plane. So if this type of dark matter exists, and if it disrupts the Oort cloud when the Sun crosses the galactic plane, and if that caused comets to fling into the inner solar system and bombard the Earth, and if that bombardment caused periodic mass extinctions, then you should see some evidence in the geologic record.

So what evidence is there? None. Well, not quite none. If you assume the model is true, and then look for a periodicity in the cratering record of Earth, you find that the cratering record agrees with the model about three times better that it agrees with random cratering. Scientifically, that isn’t very convincing data. It makes for a mildly interesting paper, but it’s mostly speculation at this point.

But Nature and several other websites have decided to take this speculative idea, add the word dinosaurs to the title, and imply that scientists are proposing dark matter killed the dinosaurs. No one is proposing that. It’s link-bait noise that makes the job of communicating real science all that more difficult. So if you see one of these sensationalized titles, don’t share it on social media. Tell your friends that share the articles that it’s speculative nonsense. Hopefully we can drown this noise and get back to real science.

Because honestly, science is interesting enough without the hype. 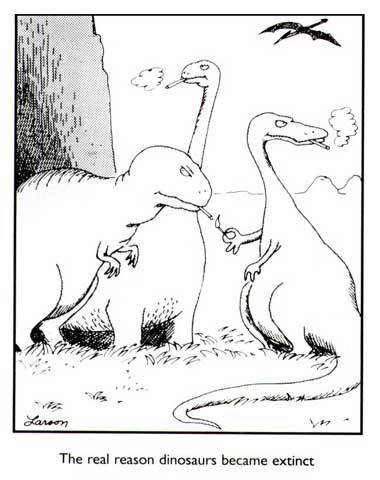 Those cigarettes look unfiltered, that’s why.