Today, we took the kids at my school to the “Days of the Dinosaurs” exhibition in Sandton. Some could not go because the damn thing is just too expensive. But it turned out they didn’t miss much.

In short, I was bored out of my skull. Considering that the whole tour lasted no more than perhaps 30 minutes, at R140 per person, one would expect to be at least slightly blown away. Especially considering we are dealing here with dinosaurs. Who doesn’t love dinosaurs?

The exhibit was staged in a dark, cavernous hole underground, with dramatic but dim lighting. It was packed to the rafters with school tours. As soon as I got close to the first dinosaur model, I could see why they did it the way they did it: in the harsh light of day, the blatantly plastic nature of the models would have been too apparent. Many of the models were inaccurate, and at some exhibits, there were guides who were clearly not very knowledgeable about the subject matter. One young lady told us, without batting an eyelid, that the Pteranodon was not a dinosaur but a bird! (Hint: she was half right).

In short, cheap, animatronic plastic crap masquerading as science education for the young. Perhaps the thing was aimed at preschoolers?

On the positive side, at least some of the models were life size, and the life size T. rex did make an impression. The exhibit may well appeal to some people, but from my point of view, it was decidedly not worth the price. In the new school term, I will no doubt have to do a dinosaur slide show to try to repair some of the damage these professional science popularisers have inflicted…

A great pity indeed. Then again, it could’ve been worse. They could’ve had Adam and Eve riding around on their own tame, coconut-munching T. Rexes and petting velociraptors while feeding them berries… :

I can understand the disappointment. An exibit of original fossils (cleaned, polished and mounted) is far more appealing than any gimmicky and perhaps over-the-top extrapolation. It leaves more to the imagination, for one thing. Nature is its own artist. 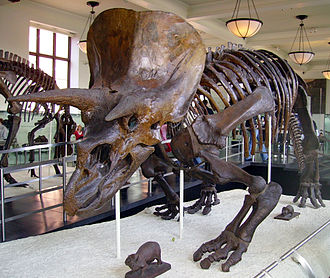 I do not object to the idea of dinosaur models, but considering the price, one would have expected far more realism than we got. I would dispense with the stupid animatronics, and rather focus on building models that are life-size, as realistic looking as it is possible to get them, and displayed in highly realistic dioramas.

And if there are going to be any guides, they will be properly trained to know what the heck they are talking about.

I found “Days of the Dinosaurs” rather insulting to the intelligence of most kids. They had two casts of fossils: an Archaeopteryx (but not the famous one with the feather imprints) and Microraptor (which does have nice feather imprints, and the kids were indeed more interested in that than in any of the stupid dinosaur models). And then they had a few real fossils that kids were allowed to touch, but these consisted only of fragments of bone. Would it have been that difficult to get hold of, say, real fossil skulls of whatever creatures? Are those so scarce you cannot let kids handle them? There was, to me at least, a certain slapdash quality to the whole exhibit.

Ok sorry to hear that,

I’m planing to take my 3 year old to when in comes to cape town.
I’m sure he will be excited in any case.

Is there a natural history museum in Joburg?
The one in Cape town is small but it started his love for Dinosaurs.

Still want to head out to the west coast fossil park with him some time.

Is there a natural history museum in Joburg?

Yes. And not too far away, there’s more.

When I was a kid a friend invited me to join their voortrekker, er, trek… to go and learn about dinosaurs. At the time the Jurassic Park frenzy was strong with us and I happily tagged along.

Little did I know this field trip was “authentic” and mostly consisted of sleeping in nothing but a sleeping bag, in the veld, in the dead of winter. Or alternately in a cave-ish hollow literally filled several inches deep in dung. We did experience an excursion to a little dino gift shop though, where the kids were obviously being milked for their allowances. So that was nice.

We saw a fossil or two and I think a dino dropping was discovered on one of our excursions.

The most memorable part of the trip though was my mother absolutely losing her mind when I got home smelling like, well, I’d slept in a cave filled with excrement. Pointing out this fact of course did not deter her from near-murdering me.

I was kinda put off from paleontology going forward.

As an adult I realise that this is science and it has no obligation to be sexy or exciting. As a kid though, the experience does leave one a bit … cold.

I’ll have to go when it comes to Cape Town. My two are nuts about dinos. Will report back when

Not expecting much, I ended up enjoying this. Probably more on behalf of the boys. One 4 the other rapidly closing in on 2. The 4 year old wouldn’t let me read anything, we had to rush on to the next dino and the next and the next! Later when I had the 1-and-quite-a-bit, he kept on insisting I put him down, waddling over to the dino’s then get scared and insisting I pick him up. When we were in line for the movie he kept wanting to go back to the dinos!

The T-rex was quite impressive. They set you up with a smaller t-rex about half way through. Came to chest height or so, mean looking. Looked like a t-rex but somehow I thought they were huge? Read the plague, yep, t-rex and yep grew to about 13m. wtf? …Aha, a teaser!

The 3D movie was fun, though it said we evolved from apes :-[ At the end of it quite a fun demonstration with A4 papers on a living room floor to illustrate life on earth.

Also, first time ever to eat at Burger King… kinda mid-way between McDee’s and Steers tbh

O yes, we where there the other day.

I was expecting it to be bigger. My 3 year old enjoyed it very much.
He was even slightly fooled by it, asking at one point is this real. I think it should make a good memory for him.
The T-Rex was for sure, the high point.

The movie just gave me the biggest guilt trip ever. But was good.

Overall maybe a little expensive for the hour we spent there.

P.S Burger King is not the same with out the bacon.