Why should this Agnes Buchan get all the $$$? As they say in Australia, “Unfair, Unfair”. It’s time for me to get religion again and enter Agnes’ market.

Sorry, but Gretha Wiid beat you to it.

WTF is Gretha Wiid? Do you pronounce the surname “weird”?

Google her if you’re really interested, she just pisses me off solidly. She’s Angus’s female alter ego. Preaches to all the good little wives to bow down to their husbands and annoint them with oil as they are the “head” of the home and one should be subservient to him.

Had a “worthy woman” conference on the 8th and spoke to 7000 women at R175 a pop and told them to be subservient to their husbands cos Eve came second to Adam and was fashioned from his rib (huh ya), but she conveniently neglect to mention Lillith.

Anyway, I’m sure there’s room for all of us!

You like women that offer no mental stimulation? That agrees with absolutely everything you say? That offer no challenge or resistance, nor any input or opinion? You ask her if she wants to go on holiday and she replies “whatever you deem right oh-great-and-worthy-one?” - Where do you feel like going? “anywhere you might want to oh-great-and-worthy-one”. ??? Sounds horrible.

From my point of view, I’d think that would be a soul-destroying relationship. Nothing nicer than a lovely difference of opinion and lenghty debate with your partner with the understanding that you’ll end up to agree to disagree. ;D

LOL! I was just kidding. Lighten up there.

;D That WAS me being lighthearted!

One where the star-rating of your suite in the great death starship is determined by your contributions to the cause.

Jip, Scientology is the second largest growing religion in Africa, second only after the Catholic church.

Ironic actually, where the RCC promotes condomless sex, the schientologists promotes faith healing, so the one side encourages the diseases and the other side kills 'em off. Sorta justice in a sick way.

I’m actually a bit of a fan of Scientology in a strange way (while at the same time being appalled by the damage it does).

But more importantly because it is such a great way to point out to believers that their “way of knowing” is nonsense. I mean if you can accept Jesus on faith, why not the imprisoned souls of space aliens? Just because it sounds ridiculous to you, doesn’t mean you can condemn others for believing it, if that’s how you think knowledge can be obtained. Scientology is like the FSM, but with genuine believers (apologies to any committed Pastafarians out there, but we know you don’t really mean it).

Oh and rwenzori, much as I applaud your idea, I think Faith has to be a root vegetable. Unseen until the harvest and all that. How bout Faith Like A Carrot. Faith that gives you better night vision

Have YOU been touched by his Noodly Goodness?

Have YOU been touched by his Noodly Goodness? 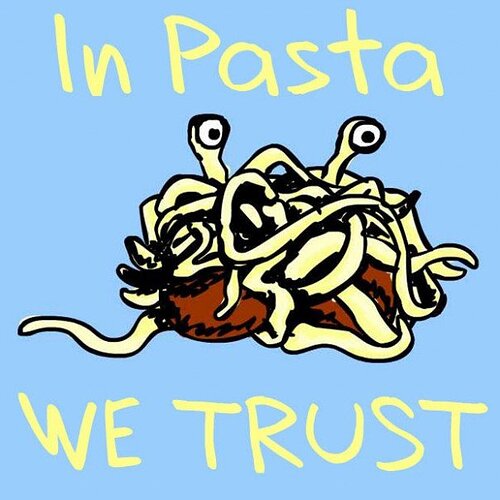 Who is your Pasta pastor?

Who is Bobby Henderson?