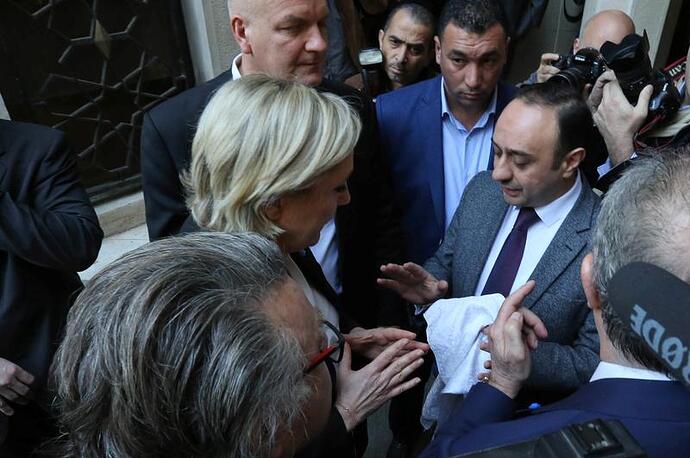 French far-right National Front presidential candidate Marine Le Pen canceled a meeting on Tuesday with Lebanon's grand mufti, its top cleric for Sunni Muslims, after refusing to wear a headscarf for the encounter.

In this particular case she may actually have a point: it’s not like the Grand Mufti would be required to wear or refrain from wearing particular bits of clothing if he visited France…

It is an example of where our tolerance has gone to the point of tolerating intolerance.

It is an example of where our tolerance has gone to the point of tolerating intolerance.

It’s the old argument: Religion does not entitle you to respect.

Religion does not entitle you to respect.

… and yet it continues with petulant obstinacy to insist that respect must be given. It was ever thus.

It’s the old argument: Religion does not entitle you to respect.

Nothing entitles anyone any respect. This is the flawed thinking that some somehow entertain… they can somehow compel respect out of other people. Any idea how many gangsters have been killed on exactly this premise? I’d wager entire wars have been fought over it.

The point is badly missed every time: You can compel fear, but respect won’t be close behind.

I do. And I also admire Trump’s AmericaniZed version of it, although I don’t agree with his stance on many political issues. It may force some very shrill SJW’s to pipe down and formulate good arguments rather than just screech louder. brianvds posted a relevant link in the shoutbox earlier: http://www.​newyorker.co​m/magazine/2​017/02/27/wh​y-facts-dont​-change-our-​minds

I am in general not the biggest fan of the right wing, but in this particular issue, Le Pen has my sympathies. Je suis Le Pen!

Now it is true that she was in this bloke’s country, but then, she was not there as common tourist. And now she is the one being castigated for being rude, but I am not convinced she was any more rude than the Mufti. He knows full well she is from a vehemently secular state where most women would find it downright humiliating to have to cover up like this, but he has no problem trying to make her do so anyway.

One reason, perhaps, why I am gad Aunt Hillary didn’t win the election: she would have humbly covered up.