Grade 8 Natural Science. Listing and A-Z of things made of plastic to highlight how dependent we are on it and how versatile it is. Just a fun group activity. They seem to be stuck on Q.

A girl (who I used to think was one of the brighter ones) asks “Miss is the end of a bird’s feather called a Quill?”
I say “Yes”.
I am mildly impressed that they know this, yet baffled why this has relevance.
So I ask.
“Well isn’t it made of plastic?”
“No birds are natural, plastic is man made,it is a type of protein- like your fingernails are made from”
“Oh” well doesn’t God make birds?" Wouldn’t he use plastic- it lasts a long time".
Muffled Tourette’s
“How exactly do you think God makes birds?”
A description only reminiscent of Santa Claus and his elves fabricating Christmas toys ensues.
We sit down to have a chat.
I then find out this week my head of science believes in Yahweh. Help.

One possibility, if your definition of plastic can be stretched to include rubber … 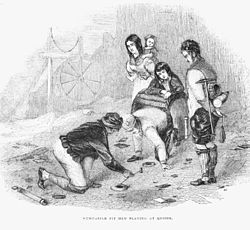 Quoits (/ˈkɔɪts/ or /ˈkwɔɪts/) is a traditional game which involves the throwing of metal, rope or rubber rings over a set distance, usually to land over or near a spike (sometimes called a hob, mott or pin). The sport of quoits encompasses several distinct variations. It is not until the 19th century that the game is documented in any detailed way. The official rules first appeared in the April 1881 edition of The Field, having been defined by a body formed from pubs in Northern England. A Jul...

once again, proof, that religion should stay the hell out of anything relating to education.
kudos for muffling the tourettes. i am not pc enough for that.