I want to believe

I notice there’s a new series of X-Files beginning today. I don’t have a TV, but saw some previews and a bit of a documentary at friends’ house. My impression is that they have way too much CGI in the new series. The old series’ effectiveness lay largely in the fact that they mostly didn’t show any of the monsters, and thus the imagination filled in the horrors far more vividly than any special effects ever could.

Anyway, any X-Files fans here? I loved the first few series (after which it jumped the shark a bit and the conspiracy became simply too big for even desperate suspensions of disbelief). Actually kind of funny how many skeptics love SF and supernaturalish kind of entertainment… 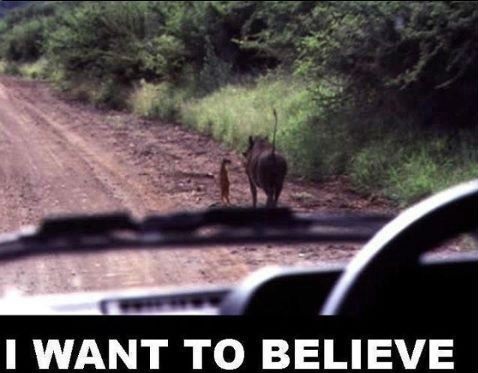 Also no TV and I’ve never seen X-Files. I do read the (very) occasional sci-fi book or maybe a sci-fi movie but I am definitely not into " SF and supernaturalish kind of entertainment".

Im a fan of all things weird and creepy. Agree that the Ex files lost the plot around series 4/5 and it was sort of downhill from there. I have the whole series and every five years or so when I have an altercation with the S/O, I run a marathon session and rewatch the lot until I’m bored.

I’m curious to see what they’ve made of it.

Looks like we can write up Tweefo as our resident exception. The poor bloke/girl (funny how I never pay much attention to members’ gender here…) has a hole in his/her pop culture and probably does not make sense of the whole “I want to believe” thing.

I am guilty of an SF/horror habit - Stephen King is one of my favourite writers, as if X-Files isn’t bad enough already.

X-File buff from when I was a kid: I’m sure I lost more than a night’s sleep to their imaginary monsters. I’ve actually had to educate the S/O by starting to watch the original series again so she has context reg “I want to believe”, Mulder’s sister situation, etc…

I agree that when the show became predominantly about shady government figures in dark allies exposing multi-layer conspiracies I completely lost interest.

It is an odd feeling though now re-watching the series after my de-conversion: It is far less intriguing now. This is a general problem I’ve encountered… movies that rely on supernatural horror and/or suspense no longer have the same impact. (For instance the hilarity of our home grown ghost-hunters crawling around a dark hospital and talking each-other into a frenzy as linked in shoutbox)

Anywho, Majin’s education is coming along and I look forward to the new episodes… while on the fence about how well it’ll all turn out. I hope beyond hope they don’t go the overly-complicated conspiracy route. I am, however, one for a director putting his balls on the line and NOT relying on an always invisible monster to drive suspense … so I disagree on that point, I want to see my monsters.

In general I do like SciFi because it gives me a rational, believable framework within which one can still dream, imagine, and tell larger-than-reality stories.