I’m a bit horrified at this proposal:

Language grammar, which consists of lessons on how language works, punctuation, spelling, sentence structure etc, is currently being covered as a separate section in language teaching. It is tested in a separate exam paper, paper three, at Grade 12 level.

The Star has seen a document, called the National Curriculum and Assessment Policy Statement for Grades 10 to 12 for English Home Language, and it shows that this third paper is being done away with, and will be “integrated” into the writing and literature components of the subject. This will not affect only English, but all other home languages. 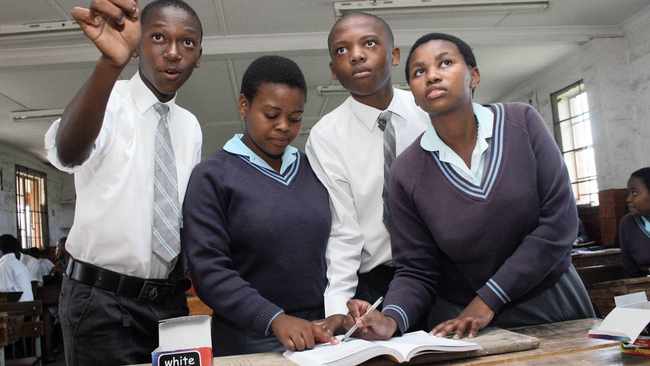 Grammar lessons may soon disappear from classrooms from Grade 10 and upwards if a new curriculum document is adopted.

All languages? So basically we will be faced within the next 5 years or so with young entrants to the job market armed with only the ability to speak and write in abbreviations?

Good grief, and I’m complaining about the state of the current affairs.

... young entrants to the job market armed with only the ability to speak and write in abbreviations

So basically we will be faced within the next 5 years or so with young entrants to the job market armed with only the ability to speak and write in abbreviations?

No, this has already happened. I run a small business, and every so often have to employ new staff. You wouldn’t believe the standard of CVs that land on my desk: bad spelling, grammar so poor it is impossible to parse what the writer actually means to say, and an inability to follow the simplest rules (noun plurals in English are as simple as it is possible to get: add an s to the end of the singular noun, but they still manage to stuff it up, usually by inserting apostrophes). I’m prepared to cut a little slack for people who are not native English speakers, but not much because English is the language used to communicate with our customers. I don’t think this semi-illiteracy is a consequence of not teaching grammar at schools, it is a consequence of not reading. If one reads regularly, one can see immediately when a word is misspelled.

That said, some of the rules of grammar I was taught at school are just so much crap. I love to brazenly split infinitives just to cause my old teachers to spin in their graves.

st0nes, I’ve come across it as well, I manage a learnership programme which runs on a yearly basis for matriculants, and its horrifying. Sifting through the cv’s every year is akin to hell for me. Even those with top marks in language studies - as well as those with English as a home language - require additional English courses (WITS runs an excellent programme which is also very affordable at R50 - included the assessment and placement in correct course). I agree with you on the reading - we’ve managed to rear a whole generation who has no appreciation for books nor reading, its tragic.

@BM, its all b/sh*t IMO, (I cant access the site though, work classifies it as “games”), if texting improved literacy, they would be able to spell, and they cannot, as been established already.

But how much is actually anecdotal, or observational bias?

Here’s my experience: I can spell and write good, much good, meye gramer are purfect. (Ok my english isn’t perfect but it aint bad for a boerseun)

Thing is, I was in the top 10 year after year. The pupils around me however, were useless. I spent many a class drooling on my copy of MacBeth while some person struggled through a single sentence over the course of multiple minutes. The same thing happened in Afrikaans class… Yeah I’m a product of the “old system”, and I’m literate, but I didn’t rate the average literacy of my graduating class that highly. In fact, I’ve often wondered how some people could reach the end of an exam paper in the time allocated given the reading proficiency I’d observed.

Could be bias, I’m not about to judge, I’m basing the opinion simply on my experiences with the young ones during the past three years. The intake on average is 150 learners, mixed bag of race, and generally ALL of them require assistance with basic communication English. When you have a matriculant that constantly sends you “massages” instead of “messages” it becomes problematic though (it stops being funny after the 50th correction).

I must add, nothing wrong with the intellect of any of these kids, the criteria we select them on is rather stringent (it has to be, its a corporate environment and there is no space for stupidity AND we’re paying for their studies, we’re not about to wantonly waste money) and most, if not all of them graduate with honours at the end of their year with us.

Back in my day, we lost marks in language studies if we ommitted a fullstop, or misplaced a comma, and it was a double dose for those who had typing as a subject, I recall being whacked over the knuckles for a spelling mistake if “juffrou” just happened to be peeking over your shoulder whilst typing a passage. (Damn, THAT was hell - still used those old KA-ching-whrrrrrr-clack-clack-clack typewriters…)