Rather than ‘hi-jacking’ the existing thread:-
“In Ten Years, Will You Own a PC, or Vice-versa?” 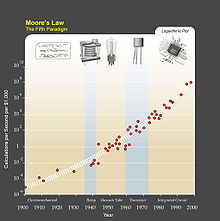 The technological singularity—also, simply, the singularity—is a hypothetical point in time at which technological growth becomes uncontrollable and irreversible, resulting in unforeseeable changes to human civilization. According to the most popular version of the singularity hypothesis, called intelligence explosion, an upgradable intelligent agent will eventually enter a "runaway reaction" of self-improvement cycles, each new and more intelligent generation appearing more and more rap The firs...

In futures studies, a technological singularity (often the Singularity) is a predicted future event believed to precede immense technological progress in an unprecedentedly brief time. Futurologists give varying predictions as to the extent of this progress, the speed at which it occurs, and the exact cause and nature of the event itself.

One school of thought centers around the writings of Vernor Vinge, in which he examines what I. J. Good (1965) described earlier as an “intelligence explosion.” Good predicts that if artificial intelligence reaches equivalence to human intelligence, it will soon become capable of augmenting its own intelligence with increasing effectiveness, far surpassing human intellect. In the 1980s, Vinge dubbed this event “the Singularity” and popularized the idea with lectures, essays, and science fiction. Vinge argues the Singularity will occur following creation of strong AI or sufficiently advanced intelligence amplification technologies such as brain-computer interfaces.

Another school, promoted heavily by Ray Kurzweil, claims that technological progress follows a pattern of exponential growth, suggesting rapid technological change in the 21st century and the singularity occurring in 2045. Kurzweil considers the advent of superhuman intelligence to be part of an overall exponential trend in human technological development seen originally in Moore’s Law and extrapolated into a general trend in Kurzweil’s own Law of Accelerating Returns.

While some regard the Singularity as a positive event and work to hasten its arrival, others view it as dangerous or undesirable. The most practical means for initiating the Singularity are debated, as are how (or whether) it can be influenced or avoided if dangerous.

When plotted on a logarithmic graph, 15 separate lists of paradigm shifts for key events in human history show an exponential trend. Lists prepared by, among others, Carl Sagan, Paul D. Boyer, Encyclopædia Britannica, American Museum of Natural History and University of Arizona, compiled by Ray Kurzweil

The “Technological Singularity” hypothesis is itself a paradigm and, as such, subject to “shifts.”

I have doubts about “technological singularity” ever happening. All around me I see dumbing down of the masses. I also see fewer and fewer people entering the science faculties. When I was a science student, it was common to hear about a fellow student who had transferred to the Commerce faculty. Only three people in the top ten in my matric class went into the sciences. The rest did business science degrees. And one of those three, graduated top of his class in physics, changed his mind and became an actuary instead.

The bright minds required to bring us to “technological singularity” are mostly absent. They are too busy making buckets of money. This, I believe, is a strong factor in delaying or preventing it.

The bright minds required to bring us to “technological singularity” are mostly absent. They are too busy making buckets of money. This, I believe, is a strong factor in delaying or preventing it.

The more I see of modern technology, the stupider it seems to me, and the further from any hint of ‘singularity’ (whatever that really means; the term seems a bit fuzzily defined.)

Perhaps I am just old-fashioned, but it seems to me that modern technology has achieved little more than adding processor-intensive bells and whistles to things, thus making them much harder to use without actually making them any better.

Micro$oft products are of course notorious for this. I find, for example, that the newest versions of their office software are all but unusable these days. Especially for me, who types with two fingers, thus necessitating me to look at the keyboard while I’m typing. So I type up this whole document in Afrikaans. When I look up, I notice that MS Word’s friendly autocorrect function has most considerately changed my entire document into English gibberish! It then took me half an hour to work out how to switch off a function I never bloody wanted in the first place, but paid for anyway.

Another example, from the exciting new world of the cell phone (a technology that only ten years ago, we all happily got along without): Three months after getting myself the simplest cell phone I could get hold of (because for cryin’ out loud, when I want a phone, I want a goddamn PHONE, not a particle accelerator/food processor/digital Bible combo with a phone possibly somewhere in there if you look hard enough), I am still struggling to work out its most basic functions. E.g. whenever I put new name and number in its phone book, it absolutely insists that I also choose a speed dial code for that number. So whenever I forget to lock the dial pad, I inevitably accidentally dial friends and acquaintances. In the meantime, there is apparently no list of my speed dial codes stored anywhere on the phone, so I don’t know which speed dial code to use for which friend anyway. Utterly useless, and a major annoyance.

Personally, there are few things I detest quite as much as machines thinking on my behalf, whether I want them to or not. And it looks to me like this marvelous, magical ‘singularity’ will in fact be little more than a world in which stupid, bureaucratic machines will do all my thinking for me and take complete control of my entire existence.

No thanks. I think in the end, the subsistence farmers out in the boondocks might actually turn out to have gotten the better deal.

Not that I really worry about it. I think we are many decades, and more probably, many centuries away from truly intelligent machines. I also suspect that such machines will turn out to inevitably suffer from all the weaknesses that humans suffer from, and thus turn out to be a waste of time and money.