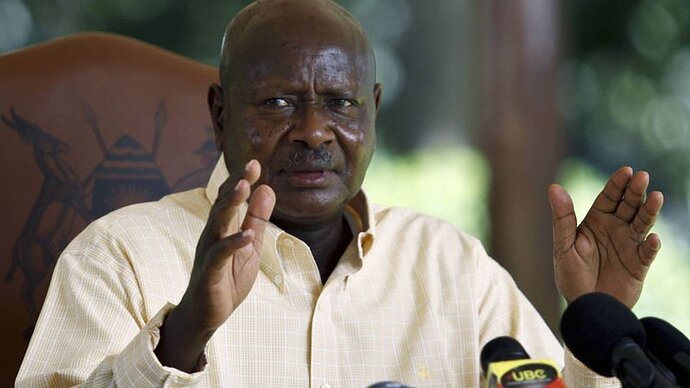 Yoweri Museveni has not signed the controversial law, saying there are better ways to cure the results of "sexual starvation" and "random breeding".

In a letter to Parliament, the president said homosexuality was caused by either "random breeding" or a need to make money. And lesbians, he said, choose female partners because of "sexual starvation" and the failure to marry a man.... "Even with legislation, they will simply go underground and continue practising homosexuality or lesbianism for mercenary reasons," he argued.

Isn’t it funny how someone could be both right and wrong at the same time?

And this bit is more to the point of this message board:

Homophobia is widespread in Uganda, where American-style evangelical Christianity is on the rise. Gay men and women in the country face frequent harassment and threats of violence, and rights activists have also reported cases of lesbians being subjected to corrective rapes.

If I am not mistaken, this happened partly because American evangelists actively started targeting Africa, after their attempts to get around America’s separation of church and state laws failed.

Isn’t it funny how someone could be both right and wrong at the same time?

It does raise something of an ethical conundrum: Is a good decision made for bad reasons still a good decision? A consequentialist will probably answer in the affirmative but the problem is that such a decision erodes confidence in the expected value of subsequent ones.

… American evangelists actively started targeting Africa, after their attempts to get around America’s separation of church and state laws failed.

Oh, make no mistake; they are as busy as ever in the US with ever more surreptitious and inventive schemes to subvert the First Amendment. Currently, they are trying to push all sorts of so-called Academic Freedom bills through Congress, most of them focussed on the idea that college instructors and school teachers get to decide, pretty much without restrictions, what is taught in science classes. This is a rather transparent manoeuvre to legitimise the teaching of such nonsense as ID creationism and climate change denial. But teachers, even fully-qualified science teachers, are not at liberty to decide willy-nilly what is and what isn’t science. The science they teach must be in line with expert consensus.

To garner public support, they diddle with the average person’s sense of fair play, especially with such approaches as “teach opposing views”, “critical thinking” and “let the kids decide”. But science certainly isn’t a democracy. Besides deploying all the customary canards in their tatty arsenal, many evangelicals also keep energetically pushing the controversy about evolution that they themselves have manufactured from whole cloth, falsely bleating that a growing number of scientists are dissenting from it. There simply isn’t any controversy in scientific circles about the major aspects of evolution. Simultaneously, they loudly cry foul à la Ben Stein’s deeply mendacious puff-piece Expelled about a tiny number of ID creationists who were refused tenure at universities. Closer inspection reveals that in each case these people were actually rejected for failing to meet academic requirements such as sufficient publication and postgraduate supervision.

One can safely expect them to carry on with such endeavours. For many of them, the goal is nothing less than establishing the US as a theocracy — undoubtedly with themselves at the helm.

Meh still, it’s kinda a good move on the part of the president, suppose with how the world works and all you must sometimes take the good news however it can be had. Doesn’t it just make you feel <abbr title=“light-hearted and carefree.
“Nan had a gay disposition and a very pretty face”
synonyms: cheerful, cheery, merry, jolly, light-hearted, mirthful, jovial, glad, happy, bright, in good spirits, in high spirits, joyful, elated, exuberant, animated, lively, sprightly, vivacious, buoyant, bouncy, bubbly, perky, effervescent, playful, frolicsome;
informalchirpy, on top of the world, as happy as a sandboy;
informalas happy as a clam
“her children all looked chubby and gay”
antonyms: gloomy”>gay1(point cursor over “gay”)

Methinks Uganda can be a really gay country with a bit more human rights ;D

No conundrum: the ends can never justify the means. If his reasoning is false but his decision has the “right” outcome, it reflects an inconsistency/error(s) in his grasp of the facts/premises. In this case clearly so…“sexual starvation” etc (wtf!!). The outcome is consequently based on this false premise and is coincidental to it being “right”. Fuzzy logic?? Yes, with many possible outcomes…he could have approved the Bill for example.