I understand a painting of our revered president in all his naked glory is being displayed at an art gallery here in Jhb. Depicting the man’s dangly bits, with two pigs in the background having a snorking good time with each other, the words “a fish rots from the head down” superimposed over a picture of Africa. Huge ruckus on the radio about it. Anybody seen a pic of it yet? I’d suppose the pigs refer to Orwell’s Animal Farm. The rest is pretty blatantly obvious as to meaning and reference.

I haven’t seen a pic of it, but I understand it’s been sold already…

Here’s the part that most offends the picayune minds of the ANC. The whole furore is ridiculous and illustrates how little our government lackeys really understand about democracy and civil liberties like freedom of expression. If you’re a public figure, especially a well-known and controversial one, you must expect and learn to live with this sort of thing. The expectation that no derision should be heaped on you from any quarter is as presumptuous as it is unreasonable… |-O

I am waiting with bated breath for the court’s decision. If they decide against the gallery, I will personally spread those pictures around, everywhere, from Facebook to everyone in my mail address book to message boards I belong to (yes, I made a point of saving them). Then the bunch of idiots will learn that in the age of the internet, attempts at censorship are pointless and in fact just make things worse for you.

For the record, I think it is bad, bad art. But not as bad as censorship. Jeebus H. Merciful Crispy, the more things change the more they stay the same. The frickin’ Groot Krokodil would have felt right at home in the New South Africa…

Spear of the nation indeed. Mtondo we sizwe…

What seems to have gotten lost amidst all the hot-headed commotion is that if one of art’s functions is to increase awareness of something through being confrontational and stirring up controversy, then the work in question has been singularly and spectacularly successful. By that yardstick, it would be wrong to label it “bad art.”

Sorry I cant resist it !

He should just have said the artist had drawn it too small and leave it at that.

I’m thinking the same, and he should be happy the artist seems to have been generous.

omfg It is on wikipedia already… ;D

How do you censor that, JZ?? (I also notice it links to the Streisand effect)

I’m thinking the same, and he should be happy the artist seems to have been generous.

I was too prudent to mention it, but I fully agree, the man should feel flattered… >:D

The ANC Womens’ League has also demanded that the exhibition be halted, and all instances of the image be removed from the internet.

Good luck with that.

And another good thing: it’s luckily a bit more abstract than the one of the Canadian PM! I wish our country could grow up and see that Zuma isn’t a Zeus and the Emperror really has no clothes, come on when are we ever going to stop blaming apartheid and hate be a bunch of haters, temting to say we should grow a pair, but clearly it seems we have môre than enough, a patriachal society like ours getting it’s ego bruised, never…

Looks like the prez has speared himself in the foot…

Watching the ANC’s frantic attempts to censor the pic out of existence, even on the web, is going to be highly amusing. In the meantime, here it is, just in case they win their case against the gallery: 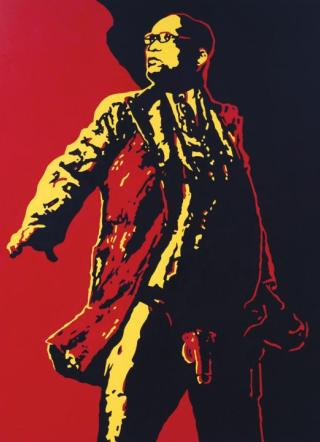 Download it, and spread it around far and wide.
I find it quite incredible that someone who has made a disrespectable fool of himself for years now, has the audacity to complain that a picture is harming his respectability. He has mostly harmed it himself, and has practically begged satirists on his knees to do this.

I wonder if his court action against Zapiro is still going on? Yet another example of their commitment to freedom of expression, but lucky for us and unlucky for them, in the age of the internet, attempts at censorship are mostly pointless and counter-productive. For this reason I am not too worried about their proposed legislation to “protect state secrets” either. Those secrets will out, whatever the law says.

Now I’m waiting for some YouTube satirist to turn the whole saga into a song. And dare we hope that Nando’s will rise to the occasion…?

And then the race card hit the table with an underwhelming thud.

I’m also somewhat bemused by the argument that it insults the majority. As opposed to what? The minority? At the same time also using the granddaddy of bad arguments: religion, cause, you know, insulting religions just aint cool. Not that we really know what religion is being attacked here specifically, but lets call it an affront to religion too, that’s sure to work.