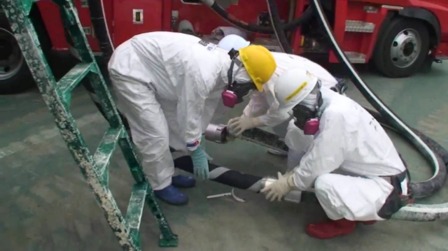 An accidental release of highly dilute homeopathic waste from a research institute in Swindon has led to calls for the centre to be shut down. Plant operators have admitted responsibility for massive safety blunders after a spilled drop of an enormously dilute test product was cleaned by a caretaker, and in complete disregard of all safety procedures, allowed to enter the water system after he emptied his mop bucket down the drain.

Institute staff have been cooperating with homeopathy regulatory safety officers and a team of engineers from Thames Water – working around the clock to minimise the risk of further dilution.

Still, the plant remains open – a spokesman claimed that their pioneering research into a cure for mild feelings of insecurity has reached a point that it must not be stopped. He then locked himself in his office and told reporters to leave him alone.

Local reaction has been mixed – many of course are living in fear – the latest advice has been for locals not to wash their vegetables before cooking. Some demand the plant be closed down. But others have taken a more pragmatic view, and accept that sometimes great advances in medical pseudoscience can come at a heavy price.

But everyone is in agreement that the emergency workers who came to the aid of the stricken plant yesterday are the true heroes. Some firefighers may have been exposed to dilutions as high as D8000 during the frantic race to prevent the atomic memory of the waste from reaching the Thames. Next to the Plant are seven abandoned Fire Engines – exposed to such dangerously low concentrations of homeopathic contamination that they can never be used again – they will eventually be entombed in concrete where they lie.

Local Fire Chief, Boutros-Boutros Jones gave a frank account of the current situation; ‘We have to accept that we’ve lost the battle locally, two water treatment works may never be safe to use again, but the fight to contain this and prevent further dilution is still on. Clearly if this reaches the sea, it’s game over.’

my god. they are going on as if it’s a nuclear emergency. it’s hocus-pocus people!!! wow. i wonder, if all these people with opinions, how many of them actually have half a clue what they are talking about.

Exactly. I think it’s from Newsbiscuit.

Thanx for pointing that out I was close to getting the bliksem in!

Thanx for pointing that that out…

I would recommend the following site for scientific based research and evidence that supports Homeopathy.http://www.extraordinarymedicine.org/2011/01/14/extraordinary-evidence-homeopathys-best-research/.

I would recommend the following site for scientific based research and evidence that supports Homeopathy.http://www.extraordinarymedicine.org/2011/01/14/extraordinary-evidence-homeopathys-best-research/.

You’ll have to explain that joke to me. As it stands, it’s too dilute for my 1X sense of humour…

I get the joke and it did make me laugh ;D.I’m a skeptic but i do not dismiss homeopathy out of hand ,for me there is enough evidence to support homeopathy as a genuine health practice.The thing with homeopathy is nobody really knows why it works and this frustrates many a scientist and doctor to take it seriously.Many misconceptions that are posted all over the internet don’t help either.It is an ongoing debate.Modern medicine on the other hand has a lot of answering to do in my view.

for me there is enough evidence to support homeopathy as a genuine health practice.The thing with homeopathy is nobody really knows why it works and this frustrates many a scientist and doctor to take it seriously.Many misconceptions that are posted all over the internet don’t help either.It is an ongoing debate.Modern medicine on the other hand has a lot of answering to do in my view.

You lose your skeptical credibility when you claim that nobody really knows WHY it works, when the fact is that nobody has ever shown that it does work, or has any effect whatsoever beyond placebo. The foundational claims of homeopathic principles were thumb-sucked in the 18th century and have never been verified through anything more scientific than multiplying anecdotes. Like curing like and dilution to increase effect are meaningless concepts. How can ‘correct’ dilution be determined when there were no measurable results in the first place?

Skepticism is NOT accepting wild claims based on anecdotes.

This will not go well. ;D

Where is that popcorn eating emoticon when you need it?

i do not dismiss homeopathy out of hand ,for me there is enough evidence to support homeopathy as a genuine health practice.

and, welcome here by the way.

My turn: The real joke is actually that it’s almost invariably homoeopaths who keep showing positive results (i.e. above placebo). This is about as convincing as psychics “validating” psychic ability or astrologers “validating” astrology or theologians “validating” religious tenets. Whenever an impartial authority undertakes a study or a meta-analysis of homoeopathy, the well comes up dry much more often than not. One consistent result that is very curious indeed is that there is a negative correlation between how tightly controlled a study is and the magnitude of the homoeopathic effect it finds: The tighter the controls, the smaller the effect. Moreover, homoeopaths don’t do themselves and their cause any favours by pigheadedly insisting on the unshakeable truth of Hahnemann’s homoeopathic principles (which fly in the face of well-established science), and their “provings” for identifying new treatments are so loose, anaemic and rigorless that they constitute another funny prank all of their own.

A dismissal of homoeopathy is therefore hardly out of hand.

This was the largest-scale ever homeopathic study, involving 2.3 million patients in parts of Cuba, who were given two doses of a homeopathic remedy as a preventative to the hurricane-triggered disease. The infection rate for leptospirosis dropped to near zero, for a cost that was a small fraction of what they had been paying for vaccination. Cuba now uses the homeopathic protocol with its entire population (Bracho, Gustavo, personal communication).

A controversial paper in Nature http://www.lsbu.ac.uk/water/ref2.html#r containing data from several laboratories, claiming to prove the efficacy of extreme dilution (the ‘memory of water’ http://www.lsbu.ac.uk/water/ref12.html#r has not been generally accepted after the results were reported as not reproducible under closely controlled and observed (by Nature’s self-acknowledged biased observers), but strained, overly-demanding and unsympathetic, conditions with negative results from only one laboratory being cherry-picked from amongst otherwise positive results .

Preliminary data obtained using Raman and Ultra-Violet–Visible (UV–VIS) spectroscopy illustrate the ability to distinguish two different homeopathic medicines (Nux vomica and Natrum muriaticum) from one another and to differentiate, within a given medicine, the 6c, 12c, and 30c potencies.http://www.sciencedirect.com/science/article/pii/S1475491607000628

From 75 publications, 67 experiments (1/3 of them replications) were evaluated. Nearly 3/4 of them found a high potency effect, and 2/3 of those 18 that scored 6 points or more and controlled contamination. Nearly 3/4 of all replications were positive. Design and experimental models of the reviewed experiments were inhomogenous, most were performed on basophiles.” (Same thing Benveniste was studying.) What frustrates the scientists is that this isn’t 100% reproducible. They are working on figuring out why.http://www.ncbi.nlm.nih.gov/pubmed/17544864

There are a hell of a lot of studies being done to isolate exactly what is having the effect.Those who claim homeopathy is invalid because it is unexplained should also note that the placebo effect is always controlled for in high-quality studies–even though it, too, is unexplained.

According to a recent study released by the Chamber of Commerce of India (ASSOCHAM), the world homoeopathy market is a $5.35 billion dollar market and growing at a rapid annual rate. If one multiplies $5.35 billion by just 1.25% annually, without adjustment for inflation, one gets a $1.1 trillion dollar global market by 2035…

Little wonder business interest committed to other forms of medicine are working so hard to destroy homeopathy. A healthcare revolution has started…

Homeopathy is a 200-year-old system of medicine used successfully by over 250 million people worldwide. It has a laudable and extensively documented clinical record and there is a large number of high quality, peer-reviewed basic science, pre-clinical and clinical studies showing its effects. For more information on this system and the extensive research supporting efficacy, please visit this link “http://www.nationalcenterforhomeopathy.org/articles-research :-*

[Homoeopathy] has a laudable and extensively documented clinical record and there is a large number of high quality, peer-reviewed basic science, pre-clinical and clinical studies showing its effects.

I note that this thread is posted in Fun etc…and so it should be. Druggie refer to the older thread on homeopathy (I still don’t know how to do the (here) thingy) my bad!

…and welcome by the way.

No, no, it’s very well kept here in the “Fun” section! I mean, the jokes might be a bit stale for some but they are jokes, right? We’ve even got the Big-Pharma-is-an-Oppressor-of-Truth punchline!

P.S. Brian, the “here” linky thing isn’t hard. Each sub-forum, thread and post has a unique hyperlink, illustrated by the following examples. You can get the link by right-clicking on the appropriate webpage link and selecting “Copy Shortcut” from the popup menu (I’m assuming you’re using a MS Windows computer with MS Internet Explorer).

Sub-forum (got from the main index page):

Thread (got from the sub-forum’s index page):

Post (got from an individual message’s heading, directly above the “Reply #X on…” description):

The following code example shows you how to implement a link (you can just copy & paste the pro forma as it is from the grey box below):

The code above will show as: “Here is how you do X.”

I hope this clears it up for you.