Anyone seen the Innocence of Muslims movie?

What were your thoughts on it, and can these “facts” presented in the movie be verified?

No, I haven’t seen it (which kind of begs the question as to why the heck I’m replying to your post :P)

Thanks for the heads up … will keep an eye peeled.

I don’t think there are any “Facts” in the movie. Sounds more like high school boys humor to me.
Meant to get a rise out of people.

Innocence of Muslims is an anti-Islamic short film that was written and produced by Nakoula Basseley Nakoula. Two versions of the 14-minute video were uploaded to YouTube in July 2012, under the titles "The Real Life of Muhammad" and "Muhammad Movie Trailer". Videos dubbed in Arabic were uploaded during early September 2012. Anti-Islamic content had been added in post-production by dubbing, without the actors' knowledge. What was perceived as denigration of the Islamic prophet Muhammad resulte...

What is the fun in that? They have to be the easiest risible people on earth.

Just call a teddy bear “Mohamed” and watch the explosion of stupidity.

What is the fun in that? They have to be the easiest risible people on earth.

Just call a teddy bear “Mohamed” and watch the explosion of stupidity.

To go on a riot in your own country against something that was done somewhere else, not by that country’s government, but by some nitwit - I agree “They have to be the easiest risible people on earth.”
Is that not what this guy is trying to do? Provoke a war? Now he can say “see told you they are so and so”. He tried it by burning a Koran and there was a bit of an upheaval but now people died. I understand America send some Navy warships to the Libya coast.

“To us, to me, personally, this video is disgusting and reprehensible. It appears to have a deeply cynical purpose, to denigrate a great religion and to provoke rage. But as I said yesterday, there is no justification, none at all, for responding to this video with violence.”

So she doesn’t like the flick, then, and will probably rate it less than one and a half boxes of popcorn out of five. Based on her poor review, I don’t think I’ll watch it either.

But more interesting is her sentiment that there is no justification for the violence. Very recently there was an observation elsewhere that the optimal game-theoretical response to bad behaviour is the head-for-and-eye approach: extreme punishment for minor transgressions. I seems that these guys certainly took it to heart when they attacked the embassies.

I wonder if the attacks will, in turn - and in line with theory - trigger a flood of similar videos for Mrs Clinton’s perusal.

I personally do not know where to draw the line, because every restriction or decision has consequences? Every person has their own idea of what is wrong or correct, so there is chaos in some places and humanity will agree to disagree. I think there will never be a perfect world. Or maybe, just maybe, we will all evolve into sensible beings…

There must be a flaw in people always taking what other people say to serious and overacting with violence. Be Zen man!

I personally do not know where to draw the line

And neither does anyone else, even if they think they do. Before we can start drawing lines to everyone’s satisfaction, there is a pretty fundamental universal agreement that is still outstanding, namely WHAT EXACTLY constitutes genuine harm, and what does not. But here the wheels already come off, because some people see mere criticism as inherently harmful, whereas many (hopefully most) others do not.

There must be a flaw in people always taking what other people say to serious and overacting with violence. Be Zen man!

Clearly the flaw is faith.

There are instances where curbing freedom of expression is justified. These include libel, explicit incitement to violence and certain situations where it is required for security reasons. In all these cases the point of departure should be that freedom of expression is the default position and that the need to rein it in requires proof. What the Muslim communities are attempting is to make Islam immune to criticism by reverting to violence on trivial provocation. That is a far cry from reacting to explicit incitement to violence. The unreasonable reaction by elements in the Muslim world should not cause us to flounder in our determination to maintain freedom of expression and a transparent society.

In my view the only places on earth that have ‘total’ freedom of expression or speech are looney bins or islands inhabited by one person a la Robinson Crusoe. If you were to draw a line from total freedom of speech (10)(as defined by John Stuart Mill in “On Liberty” to zero you’d in all probability find that most countries lie between 7 and 4 while in less liberal countries/peoples such as totalitarian states, ultra conservative religious enclaves etc would lie between 1 and 3. Very few if any would fall above 7 (subjective I know). The Stanford Dictionary (http://plato.stanford.edu/entries/freedom-speech/) paraphrases Mill:

The limitation he places on free expression is “one very simple principle,” now usually referred to as the Harm Principle, which states that the only purpose for which power can be rightfully exercised over any member of a civilized community, against his will, is to prevent harm to others. (1978, 9)

The dilemma lies in drawing lines and when you have a variety of ‘norms’ or value systems such as is propounded by religions, these lines are almost impossible to agree on or even to tolerate. Society(ies) is ultimately the final judge. A movie is a very public document and if this harms/gives offence as it seems in this case was designed to do, you can expect an outcry from the community it was aimed at. I think the makers of the movie need to defend their stance (e.g. does the movie contribute to improving understanding of different values or improve social values) and if this is not possible (or is indefensible from the outset) need to apologize and withdraw it: to use ‘freedom of speech’ as protection may in this case be inappropriate and an abuse of the right to free speech however un/limited it is in the US.
On the other hand, when I looked at the infamous caricatures done in Denmark some years ago of Muhammad I could not find any (or very little) reason to take offense, but then I’m not a Muslim and Islam states that any drawing of the holy man is forbidden…but forbidden for whom? Surely not a Danish cartoonist/paper? Sanction could be applied by not reading that paper but the sanctions they (the Muslims) embarked upon were in themselves immoral and wrong.
I take offense at the manner in which Muslims punish their own women for example for transgressing their laws, and if I and my millions of supporters were to take to the streets it would in all likelihood be repressed by the authorities as being too sensitive and hence dangerous yet they (the aggrieved Muslims) get away with it…and here lies my problem. I will be attacked for criticizing another communities’ value system/traditions and my freedom of expression curtailed. ???

I found this to be an absorbing read on this.

I found this to be an absorbing read on this.

Well said.
Thanks for the link, ingwe.

Some obscure Egyptian in America cobbles together a low grade movie accusing Islam of being given over to excessive, indiscriminate violence. In response a Muslim woman in Afghanistan drives a car packed with explosives into a van full of South African pilots who have never even heard of the film or the film maker and are not even Egyptian or Americans and blows them all to pieces. Seems that film maker knows exactly what he is talking about! 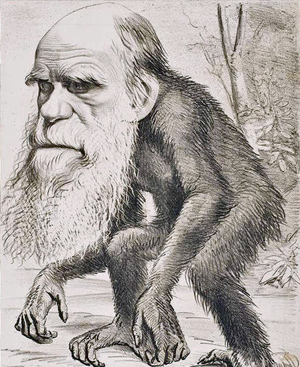 In revenge, I’m going to blow up a bus full of Ugandan doctors in Tahiti. So there! THAT will teach the blasphemers a lesson!

Chuck Darwin. It’s a 19th century cartoon, but that makes no difference. I will have my revenge and my virgins!

Protestors demand death to the West, but will spare iPads and Adidas for now Furious protestors demanding death to America and its Western allies say they will spare brands like Nike, Manchester United and Apple “for now”. Likewise, they say, Israel must be obliterated, but they will keep using Jewish medical inventions. “The Great and Little Satans are the source of all evil, but iPads and insulin can stay,” said one protestor.

Western embassies continue to be besieged after the discovery of an online film that insults Islam, despite calls for calm from North African and Middle Eastern governments. However, according to Moroccan protester, Yusuf Yusuf Yusuf, the reaction is entirely fair.

“We had three choices: either recognize that the film is particularly obvious internet trolling that will be watched by about fifty people and otherwise ignored; mount a class-action lawsuit against the film-maker in the United States and sue him into bankruptcy to make sure he never does this again; or go ape-shit, burn stuff, and generally reinforce stereotypes about religious fundamentalism,” said Yusuf. “Now let’s burn them! Geez, bra, watch out for my sneakers, they cost like fifty bucks.”

Fellow protestor, Abdul Angri Ghai, said that the attacks were about more than the film.

“The pervasive influence of America on the world is evil and wicked. America is like the tripods in War of the Worlds, the Spielberg version. I’ve got it on DVD if you’re interested, totally legit copy, pay no attention to the handwritten label.”

He added that it was also time to wipe Israel off the map.

“But, because we are merciful, we will not also obliterate Jewish medical inventions, like insulin, or chemotherapy, or pacemakers, or the cure to tuberculosis,” he said. “Oh, and I think Jews also invented nuclear bombs. We’ll keep those, too.”

Meanwhile theologians say the current wave of protests raise important issues in the ongoing global debate called ‘My God Can Totally Beat Up Your God’.

“If you’re religious you kind of have to pay attention to this,” said Dr Stig Mata. “I mean, we’re seeing Muslims storming embassies of Christian countries and not a single protestor is getting smited. If there is a god, it’s looking a lot like a Muslim one. Sorry, Bible Belt.”

But, he said, he would rather be praying to the wrong God than to no God at all.

“The alternative is too depressing. If you don’t believe in any gods, then all you’re going to be seeing is people regressing to a mob that’s been whipped into a killing frenzy because a bigoted mouth-breather with a Youtube account insulted its imaginary friend.”